Under Her Skin (Lone Star Sisters #1) by Susan Mallery 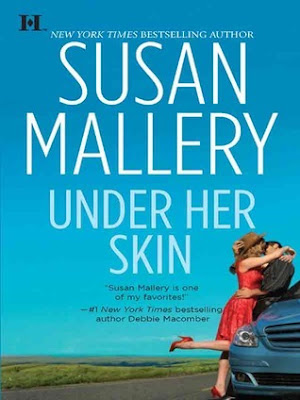 Lexi Titan can just see the headlines. All of Titanville will be buzzing. Not that she has any other choice. Faced with exactly thirty days to come up with two million dollars, she is out of options. Marry Cruz Rodriguez or lose everything — the successful day spa she built herself, her tyrant of a father's respect. And the long-standing competition with her sisters for the family business.

Cruz has money, success, smoldering good looks — everything but the blue blood needed to become a true member of Texas society. If Lexi agrees to be his fiancée for six months, lending him her famous father's influence and connections, he'll hand her a check on the spot. And in six months they'll go their separate ways.

But neither one is prepared for their long-ago shared passion to throw a wrench into what would seem to be the perfect deal..

Under Her Skin was a fun read. I am glad I started reading this series, even if I did read it a bit out of order. It was interesting seeing how everything started. Note some slight spoilers ahead.

Lexi and her sisters are all in competition for their fathers love. He told them that only one of them will get everything when he passes, and whoever wins then might get a bit of his affection as well is what they hope. They all want it, but none of them have it. Jed is nit a very nice man and he doesn't really care about any of them. Only in so much as what they can do for him.

When Lexi left her job at her fathers company to open her own day spa she took a loan that was callable at any time. Well it was just called and now she needs $2 Million that she doesn't have. She can't ask her father for it as that would mean she is out of the running for his affection so she is stuck.

Cruz overhears a conversation with Lexi where he hears that she needs the money. He has plenty and he needs a way to get an introduction to high society. He grew up poor and it doesn't seem to matter than he is well off now they still won't accept him. He spent one night with Lexi so long ago and he kind of hasn't forgotten her since. He offers her a great deal - be his fiancé for 6 months, live with him, sleep in his bed, and he will give her the $2 Million.

Lexi still remembers her night with Cruz. She was so happy when she woke up the next morning, so hopeful that something would come of their one night together, only to find Cruz so freaked out and obviously wanting to leave asap. It hurt her, but she never really moved on from him. She never really let anyone else in. She knows it will be hard to be his pretend fiancé, but what else can she do? Whenever he is around she still is drawn to him, but she will just have to try and protect her heart. This is just a business deal.

Throughout it all we get introduced to Garth for the first time. Cruz was looking into who called the loan and some other things that have been happening to Lexi and her family. It all leads back to Garth, though nothing is provable. I really enjoy the continuous storyline of Garth trying to ruin the family as the sisters all find their true loves. I really enjoyed this story Cruz and Lexi are wonderful together and it was just so much fun. Of course you have a bit of drama, these stories are very formulaic, but I still love them. I love the characters enough that I don't care that at page x this will happen, followed by something else, followed by the other thing. I know what to expect and yet I still love reading it. Really a great story. I can't wait to read the rest and see what happens.