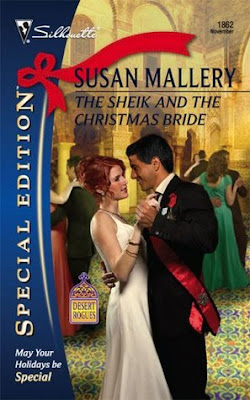 
From royal nanny to princess bride? Dedicated teacher Kayleen James was determined to safeguard the future of her orphaned students--even if it meant defying Prince As'ad of El Deharia himself But the seductive ruler stunned her by offering to adopt the three little girls. On one condition?

Suddenly As'ad was a single father in desperate need of a nanny, and Kayleen was the only woman for the job. Soon the palace was in an uproar--all because of the spirited redhead. Losing his heart wasn't part of the arrangement, until Kayleen showed the honor-bound sheik what he'd been missing. Could he convince her that she belonged in his exotic desert kingdom as his princess--and his wife?

Oh The Sheik and the Christmas Bride was a fun read. It has a bit of Christmas magic, but it was really just a sweet story overall.

When As'ad's father is lamenting the fact that none of his sons are married, his aunt steps up to say maybe they should interfere a bit. Maybe they should set up his sons, without their knowledge of course. She thinks she can find the perfect girls for them, but of course it would not be proper if their father interfered so it is all up to her.

As'ad's aunt burst in one day needing his help. There is a problem at the local school and he needs to get there right away. Only he is available to help so he must come quick. When he gets there he finds the situation not quite as dire as the aunt made it out to be, but there is still a bit of a problem. Kayleen is trying to keep three orphaned sisters at the school, while someone is trying to take them away and split them up. Kayleen knows what it is like to be all alone growing up. She is just biding her time until she can go back to the convent where she was raised. Before she can hide herself away from the world once again. She has never had a boyfriend or anything like that. She tried dating just a couple times, but it never worked out. Even though she would love someone to love, who loves her, a real family, she just doesn't think it is in the cards for her.

When As'ad arrives on the scene he finds Kayleen who is just a little ball of energy. She is like a mama bear protecting her cubs. She wants to keep these sisters together, to give them the future they deserve, instead of letting them grow up alone and taught to be servants. As'ad is caught up in the middle of this with no real good way out. The only way he can fix this, he can help Kayleen, is to adopt the girls as his own. That is the only way to not offend the other guy. No one is more shocked than Kayleen when that is what As'ad does, only he will only do it if Kayleen joins them as their nanny.

The two of them were so cute together. Add in the girls and it was just a sweet story. Kayleen loves where she is living. She loves the desert and the different cultures of the people who live there. She is such a sweetheart. As'ad is also a sweetheart, but he has been raised believing emotions make you weak. His father never showed much emotion in from of them, never broke down when his mom died, so he thinks love and all of that is for the birds. He likes Kayleen or course, wants to marry her, but not love her. He was cute. I loved watching him try and figure everything out. Watching him realize that maybe he does love Kayleen and the kids. Oh I really enjoyed this one. Such a fun read.