The Wedding Season by Samantha Chase 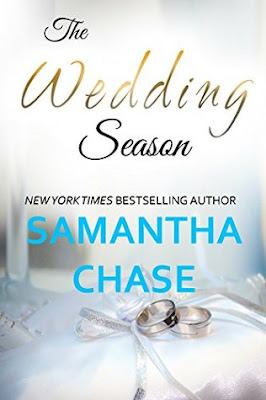 
There were three guarantees in Tricia Patterson’s life:
1. Her friendship with Sean Peterson was rock solid
2. She had a career that she absolutely adored
3. This summer was going to be the death of her

With the proverbial “Always a Bridesmaid and Never a Bride” becoming her new mantra, Tricia didn’t know how she was going to survive this year’s round of weddings. Six of them this summer alone! In an attempt to ward off the pity-party, her best friend Sean gives her the perfect solution to help her get through – he’ll pretend to be her boyfriend. While not certain that was going to be of any help, Tricia’s knows it also won’t hurt.

When circumstances beyond Sean’s control keep him from coming home to Tricia’s aid, he sends his brother Ryan in his place. Four years older than his brother and his best friend, Ryan isn’t sure why these weddings are such a big deal. He’s also not sure of what the exact nature is of this relationship between Sean and Tricia. And that’s becoming a big problem because the more time he spends with Tricia, the more he realizes that she’s the one he wants to plan a wedding with.

In general I really enjoy Samantha Chase's books. She is definitely on my list of favorite authors. When I saw The Wedding Season and realized I hadn't read it yet I jumped right to it. Only it was just an okay. Not as good as her other books unfortunately. Still an alright read.

Tricia and Sean have been bff forever. They are as close as they can be, but nothing romantic has ever been in the cards for them. They have a lot of the same friends and when they have a bunch of weddings coming up again they decide to ward off the pitying looks and pretend to be a couple. They will go to the weddings, pretend to be together, just have a good time. That will be much easier than dealing with their friends trying to set them up. Only Sean gets injured and cannot go anymore so he asks his brother Ryan to go in his place.

Ryan is a few years older than Sean and never really hung out with Tricia much. He was already doing his own thing when she became friends with Sean. He had already spent some time with Tricia when Sean asked him to step in as her date. He was already realizing that she was this incredible lady that he kind of liked. Only he wasn't quite sure if Sean was really just friends with her or if he had deeper feelings.

Really both of them, Ryan and Tricia, start falling for the other and it quickly becomes a relationship. Though Tricia is not really sure what will happen once the wedding season ends. One of my issues with the story was how fast the pace was. Everything seemed to just happen pretty instantly. It felt a bit rushed. There was a bit of drama at the end that was a bit eh and overall it was just a good read, not a great read. Still one of my favorite authors, this is just not one of my all time favorite books.