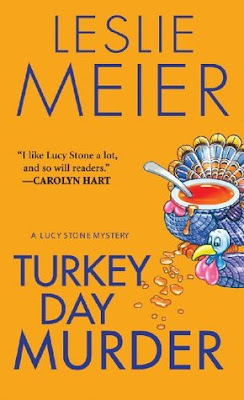 
Tinker’s Cove has a long history of Thanksgiving festivities, from visits with TomTom Turkey to the annual Warriors high school football game and Lucy Stone’s impressive pumpkin pie. But this year, someone has added murder to the menu, and Lucy intends to discover who left Metinnicut Indian activist Curt Nolan deader than the proverbial Thanksgiving turkey—with an ancient war club next to his head.

The list of suspects isn’t exactly a brief one. Nolan had a habit of disagreeing with just about everybody he met. Between fixing dinner for twelve and keeping her four kids from tearing each other limb from limb, Lucy has a pretty full plate already. So what’s a little investigation? But if she’s not careful, she just may find herself served up as a last-minute course, stone-cold dead with all the trimmings…

Turkey Day Murder is the first book by this author I have read. I was expecting a fun, light mystery around Thanksgiving day. Maybe a little zany fun. What I got instead was a rather dull read. All of the characters were rather boring, the murder, the investigation, everything. Really Lucy didn't do much investigating she just thought about things for the most part and noticed people as she did her job.

Lucy is a reporter who covers the town meetings. She never writes what really goes on, how the one guy sleeps through the whole thing every time for example, as the small town wouldn't like that. She has three daughters and a son who left for college in the fall and will be home for Thanksgiving. She misses him and is excited to see him again. He is bringing a friend, but she hopes it will be just like it was when he lived there. Only it is not. Her son brought home three friends, they are almost never home, they are just off doing their own thing. Most of this book seems to be about Lucy wanting everything to be perfect and the way it used to be and lamenting it is not. The way she is, the way she thinks, I didn't care for her at all. She just is...she never says anything about things that bother her and just expects them to change. Like she never talks to her son while he is home, just expects him to be the same as he always was. There is talk with her friends about how you never get back the same kid once they go off to college, how that changes them, how they grow, and on and on. There was just a lot of domestic details that I didn't really care about that made the story not so much fun to read.

Through all of that you also have the Metinnicut tribe trying to be recognizes as a tribe. Lucy finds that they have plans to build a casino in town if they do get tribal status and that of course is polarizing in town. Some people support it, some people don't. Curt was a very vocal member of the tribe who doesn't want anything to do with a casino. He is really proud of his heritage and just wants them to be recognized for who they are. He gets in a lot of verbal sparing matches with people so when he shows up dead at the Thanksgiving football game there are a lot of suspects. Lucy's friend asks her to help investigate, and Lucy grudgingly agrees, but then the friend is not very nice to her. When the friend doesn't think she is doing enough or finding the killer fast enough she just tears into Lucy. It was strange and just made me think why would you still help this person out? I mean if they are not going to be thankful for what you can do then why bother with them? Or her husband who doesn't seem like the best as he yells at Lucy for not taking care of the house and stuff. It was just...I didn't really get to know or care for any of the people I met in the book. It was not fun and lighthearted, it was more Lucy bemoaning everything which made me not want to continue reading. I did and it felt like everything just suddenly got wrapped up, but I wanted more of a holiday read. Maybe next year I will find a good Thanksgiving read.