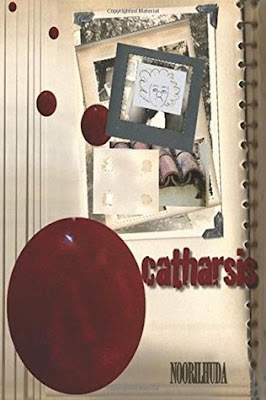 
Ten year old Daniel has been missing for more than a week.  His family and the police have all but lost hope of finding him alive. Then a strange old man enters the precinct at the 99th Avenue and declares he knows where the boy is - and who he’s with. The lead detective on the case Aurora Fox is skeptical. Is the hemophiliac puppet master, Maxwell Caine, part of the puzzle or the solution - and why does he look so dolled up?

Dark tale of a tough-as-nails detective, a curious old man and a persistent district attorney - all trying to catch a pedophile - (scratch that) - a serial killer.

What would you do to be free?

I really wanted to like Catharsis. I really did. I love thrillers, but this book...it just wasn't that good. It was really confusing, it didn't make a lot of sense, the characters were not realistic..it wasn't a great read.

One of the biggest issues I had with the story is the characters didn't make sense. They did not seem like real people. For example the main character, the cop Aurora, was WAY too abusive, abusive, and angry to be believable. In one of the first scenes she is in a cafe and sees a mom shaking her daughter so she gets up, grabs the lady and starts yelling at her in a very scary way. The mom doesn't seem to get it so she asks the other patrons if they saw this lady abuse her child and they were all so scared and just agreed with Aurora as they don't want her to turn on them. Then she grabs the lady by the throat, shoves her into the wall, and "slapped her silly." Yeah. To top it all off she takes the woman's purse, looks at her id and threatens her. She will come find her since she now knows where she lives if she is not nicer to her daughter. And nothing happens to Aurora over this or any other incident in the book. Sure. Okay so a cop just randomly goes off the handle on everyone all the time (this incident with the woman in the diner is not unusual behavior for her) and nothing ever happens to her? She is just allowed to roam the city by herself, no partner, no backup, and do whatever in the world she wants? Sure. I buy that. Really I just kept thinking there is NO WAY she was able to pass the psych eval. She shoots and kills people and afterwards just goes on with her trail of terror. No psych eval, no take a few days off while they look into it and make sure it was a good shot, nothing. So either everything I have ever seen/read/know about the cops is wrong, or this is just not the way the system works. She is not upset by the shooting at all either. Really it seems like she just wants to beat and/or kill every person she ever comes into contact with.  The book does touch on the original psych eval, Aurora says she can fake it, but I don't believe it at all. She was not able to fake it throughout the entire book even when she should have so...she was a mess. Just like all of the characters for me. They all had things that made them not realistic.

When reading this book I felt like I was constantly confused, like what is going on? This makes no sense?! and not in a good way. The logic at times made me scratch my head as just because a doesn't mean b, I can think of twenty other scenarios that it could mean, so it was confusing. Because the characters were so unbelievable for me it was hard to follow the story since they didn't act like real people. The way they spoke was not like people actually speak, it just wasn't real. The sad thing is I really think the barebones plot line was interesting. The ideas behind the story, the old man who makes puppets, who the bad guy was, the costumes, all of it was really great. If you just told me the storyline I would say that sounds like a good read. Unfortunately the writing and the characters and everything just ruined the great ideas. The story has a lot of potential, but unfortunately the execution was not the best.