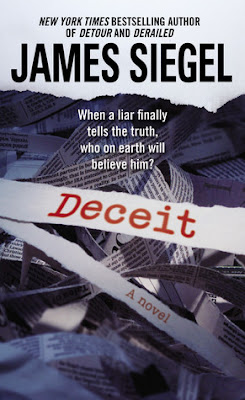 
It looks like just another car crash: a head-on collision on a lonely stretch of desert highway that leaves one driver dead. Yet Tom Valle, the local newspaperman assigned to the story, is damned good at spotting lies. He should know--once a star reporter at America's most prestigious daily, he was disgraced after being caught spinning columns of lies and exiled to the smallest town paper that would have him.

Seeking personal redemption and the resurrection of his career, Valle investigates a trail of cover-up, fraud, and murder stretching back for decades. But the path of corruption is so dark, Valle wonders if this story will redeem him, or kill him.

I started reading Deceit while on vacation and it was literally the only English language book to borrow where we were staying. It sounded alright and a good read for a rainy day.

Tom Valle is working at a small town paper. He used to be a hot shot reporter, but ended up losing it all after it came out that he made up a lot of his stories. His career was ruined and he had a bit of a rough time of it, but was trying to make a new start with the small town paper. Not that it was exciting or anything, but at least he was still reporting.

Then some strange things start happening. He is sent out to work on a story about a 100 year old lady at the home in town, then a car accident with a dead body that just doesn't add up, and finding someone broke into his house and Tom is determined to get to the bottom of it all. It doesn't seem like it all fits together, but what if it is all connected? Who broke into his place and why? What is actually happening? And why won't anyone talk about the flood that wiped out the entire neighboring town many years ago?

It was interesting reading the story as it is written like Tom is writing it as he is waiting for the bad guys to get him. He is writing it to you, the reader, so you can see what happened. You can connect the dots just like he did. I liked how everything unfolded slowly. All the pieces started fitting together to make the whole picture.

The bad guys were really great. Everything that happens, how everything is connected and everything they did to Tom was genius. I really enjoyed that. Overall what was going on was a bit eh - the story they wanted hidden, but it was a good read. The writing itself was a bit lacking for me which made it just a good read and not a great read. Still a fun way to spend a rainy day at the beach.