The Way Home by Belle Calhoune 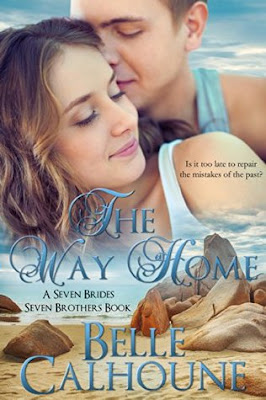 
Christian Romance. Seven boys were adopted from the foster care system by Alec and Maggie Donahue, a loving Irish couple living in Breeze Point, Cape Cod. Now grown men, the brothers are making their way in the world in their chosen professions, each hoping to find love that will last a lifetime.

Blue Donahue, an internationally-known journalist, has come home to Breeze Point, Cape Cod to celebrate his parents’ fortieth wedding anniversary. When his father suffers a stroke, Blue, along with his six adopted brothers, is thrown into a tailspin. When he comes face to face with Sarah, the love of his life, his heart awakens to all the possibilities stretched out before them.

Sarah Dalton, an emergency room nurse, can’t believe her eyes when her ex-fiancé, Blue Donahue, comes crashing into her hospital. Four years ago their relationship crashed and burned when Blue showed up two hours late for their wedding. Now, she’s forced to face the only man she’s ever loved as he deals with a family crisis.

The hurts of the past loom large between Blue and Sarah. But as circumstances drive them together, they find that the love they thought they’d lost has endured. And, with faith and truth, they may be able to create a love stronger than any they’d ever dreamed possible and get their happily ever after.

The Way Home was not a book for me. It is a christian romance with a good bit of God talk, but that is not why I disliked it. I don't know how I missed that in the synopsis since it is literally the first thing it says, but I did. Even though that got to be a bit much for me at times, it wasn't that bad. Not as preachy as some other Christian reads. No, the reason I didn't enjoy this story is it was just pages and pages and pages of the same thing. It dragged on and on and was very tedious to read even though it wasn't very long.

Blue and Sarah were engaged to be married, but then Blue showed up at their wedding 2 hours late. Sarah doesn't know why and she never let Blue explain what happened. She just told him to leave and she never wanted to see him again so Blue left. Now he is back in town and they both realize they still love each other, but can they move past what happened and start again? Blue's dad ends up in the hospital which adds to the tension and actually helps Blue and Sarah reconnect (since Sarah is a nurse). It would have been okay, but both characters just kept going on and on and on about the same thing without actually doing anything about it. Sarah could have asked Blue about what happened and listened instead of constantly being like I don't want to know, it is too late, blah blah blah blah. At the same time she can't stop thinking about what happened and going on about the same thing to herself all the time. Blue could have told Sarah why he was late, could have brought it up, could have done something instead of thinking about how he regrets what happened and needs to tell her the truth, but continues to not do so. They both act like nothing happened and try to just forget everything while thinking constantly of the past. It was to much for me.

My other issue with the book? The ending. I suppose slight spoiler alerts! Sarah and her sudden change of heart after talking to her sister? Really? It was just too lame for me. Like I get what her sister was saying, but that was not really a reason for Sarah to forgive everything. It would have been better had they talked things out earlier then have the rest of the story be Sarah working through what happened. Sure they should be together, people make mistakes, but it was all a bit too unbelievable and simple. Not the story for me.