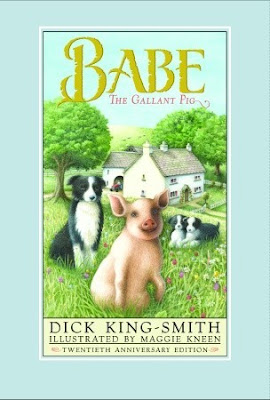 
When Babe, the little orphaned piglet, is won at a fair by Farmer Hogget, he is adopted by Fly, the kind-hearted sheep-dog. Babe is determined to learn everything he can from Fly. He knows he can't be a sheep-dog. But maybe, just maybe, he might be a sheep-pig.

Oh Babe: The Gallant Pig is such a cute book! I was telling my husband I was reading this one for my challenge and he was just like you never read it before? He had when he was younger, which makes sense as it is a children's book, but I never even knew it even was a book. I saw the movie when it came out, but that was about it. It is a quick read, but so cute! Enjoyable for people of any age, not just children.

Babe is a piglet that Farmer Hogget wins at the fair. At first the farmer is just going to feed him till he gets big, then eat him, but he quickly finds that Pig is no ordinary pig. Pig is smart and kind, always eager to learn, and from day one has been like a pup to Fly the sheepdog. When he becomes interested in herding sheep like Fly he becomes determined to do it just as well. Only he has a slightly kinder approach to the whole thing and the farmer quickly realizes he might have an award winning sheep-pig!

Babe was really cute. I loved the glimpse into the farm animals lives, how they spoke to and thought of each other. Babe is so kind and caring, while Fly was as well, but she was raised that sheep are stupid and she just has a different view of everything. I really enjoyed it and how Fly learned you don't always have to be snappy to get people/sheep to do things, asking nicely is much better than nipping at their heels. A good lesson for kids, but just a really cute read for adults as well. This was my first time reading it and I will probably go back and read it again when I just need something light and fun. I am so glad I am doing this Gilmore Challenge as I never would have thought to look this book up and read it otherwise. It was so much fun.