The Paper Swan by Leylah Attar 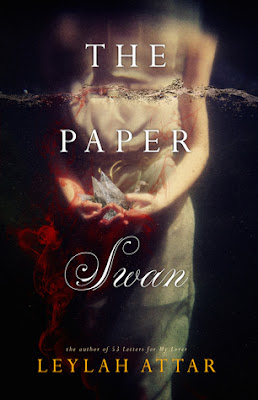 They say it takes 21 days to form a habit.
They lie.
For 21 days she held on.
But on Day 22, she would have given anything for the sweet slumber of death.
Because on Day 22, she realizes that her only way out means certain death for one of the two men she loves.

A haunting tale of passion, loss, and redemption, The Paper Swan is a darkly intense yet heartwarming love story, textured with grit, intrigue, and suspense. Please note: This is NOT a love triangle.

A full-length, standalone novel, intended for mature audiences due to violence, sex and language. Subject matter may be disturbing for some readers.

The Paper Swan was an interesting read. Not quite what I was expecting, but I enjoyed it. I will admit that I read it just because I wanted to see who the two men the main character loves were that made it not a love triangle. It definitely was not a love triangle just as the synopsis says.

I think I should probably put a spoiler alert warning in here first thing as really anything I write will give away some of the plot. The synopsis is vague, you don't really know what you are getting into, and that was fine. So be warned if you read ahead there might be some minor plot details.

While the writing for this story I found to be pretty good, I just thought it was an okay read over all. I enjoyed it, but I also had to just go with a lot of the plot line. Like the sudden transition from hate to love of the main character was not at all believable. It was just like wait a minute - why are you now okay with everything that happened? Why are you not upset that he did x, y and z? Why do you feel bad for him for doing those things? It was just a bit too much at times.

Skye is the daughter of a very rich man and kind of spoiled. She has just been kidnapped when the story opens and through some background story chapters you end up learning about her young childhood in Mexico. You also learn the story of her bff Esteban and everything that happened to rip the two of them apart. Her abductor, Damian, is not a nice person and Skye is left trying to fit all the pieces together. When they do complete the picture it was just a bit....it was a bit much. I don't know that I could just forgive everything no matter who you are and why you did what you did.

Even though it was a bit far fetched, a bit unbelievable, I still enjoyed the story enough. If I just set aside how Damian hurt Skye and everything, if I just went with that, then it was kind of sweet. They still have issues, Damian has a lot of problems obviously, but it was cute. For a storyline that I thought would be much darker it seemed to be holding back. It wasn't as bad as I had thought it would be and really everything was pretty easy. It was a strange read for me as some things I loved, like the writing, but some things just were not that good, like some of the plot points. So a bit of mixed feeling by the time I got to the end, though overall it was enjoyable. An interesting read even if you had to go with the story at times.