Forever Bound (The Protectors #3) by Samantha Chase and Noelle Adams 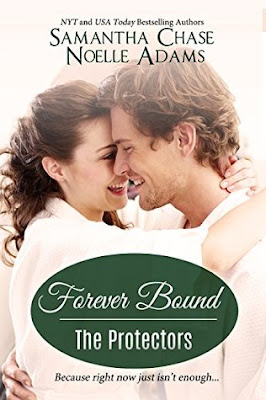 
I’ve been a lot of things in my life. Marine. Bodyguard. Security expert. Player. Heart-breaker. Occasionally an asshole.

Never a first-grade teacher. Until now.

It’s the most ridiculous undercover security job I’ve ever had to deal with. Corralling a bunch of six-year-olds while I try to do my job and keep anyone from knowing how clueless I really am.

I manage to fool everyone. Except her.

She’s an actual teacher, and she’s determined to find out what I’m really doing here. She doesn’t trust me, and her daughter doesn’t like me.

And the worst part is that I’m starting to like them. A lot.

So now, instead of being the tough guy, I’m stuck with rowdy children and Christmas pageants and falling in love.

It’s not the way I thought I’d spend Christmas.

Forever Bound was a good read. It was quick, and cute, but not very Christmasy like I had hoped. I had been saving it to read for the holidays, but it is not really a holiday read. Really the Christmas pageant and such is hardly mentioned through the book. Oh well, it was still a good read.

Declan is a big, tough ex Marine who is tasked with protecting a first grader. She is fine outside of school, but her father needs someone to watch her while she is there. So Declan has to pretend to be a substitute teacher for her first grade class and he has no idea what he is doing. He is not a kid person, not a teacher, he just is in way over his head.

Kristin is a fellow teacher who has a child in Declan's class. Her kid loves school, loves learning and working on whatever. Lilly, Kristin's daughter, tells her how the substitute isn't really teaching them anything which Kristin doesn't like at all. Man she was not very easy to like at first. She is very strict and not very happy to find Declan teaching her daughter. She knows there is something odd about him, he won't talk about his past teaching experience or anything like that. She thinks he is a fraud and is determined to out him and get to the bottom of everything. She feels bad about it slightly, but she doesn't know what else to do. So what if she is attracted to him...that doesn't matter. She hasn't dated since losing her husband, a Navy SEAL. She still misses him, but Declan gets to her.

For his part Declan never thought he would settle down with a wife and kids and white picket fence. He just didn't think it was for him. But Kristin and Lilly have him thinking different. He likes them both, he falls for both of them. He wants to be with them, but Kristin isn't sure she can be in a relationship again. She doesn't want her daughter, or herself, to be hurt if things don't work out. Better to not take a chance. Only life doesn't always work that way. It was cute watching the two of them figure everything out. From being not really friends to friends with benefits to more it was a cute read. Of course everything works out in the end and it was a nice read.