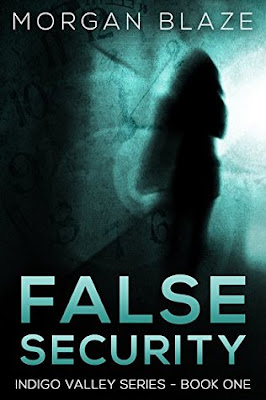 
Love wasn't in the contract.

There are two things Wynn Holcolm can't stand -- liars, and her father. Sexy bodyguard Foster Drake is a liar who works for her father. Unfortunately, he may also be the only man who can keep her alive.

When a wealthy Vegas gambler hires the elite VIP Vegas Securities firm to secretly protect his daughter -- who's perfectly safe and living in a small tourist town just south of Sin City -- Foster is less than thrilled to land the assignment. She picks his fake dating profile from the bait they're using to get close to her, and things go from bad to worse when she discovers the deception and refuses to see him again.

But it turns out Wynn's life actually is in danger. Now Foster must win her trust and keep her close by, because the man who killed her mother has unfinished business with her -- and her father is keeping a deadly secret that could destroy them all.

False Security was a fun read, quick read. It wasn't a very long read, but I enjoyed every page of it.

Foster is a security expert. His job is to protect people, to make sure anyone who wants to harm them doesn't get the chance. He is good at his job, but he still hasn't forgiven himself for what happened when he got involved with a job in the past. He doesn't want to be in that position again as he just doesn't think he could protect someone he cares about.

Wynn is the daughter of a very rich man. A man who was never really a father to her and whom she hasn't seen in a long time. She wants nothing to do with him. After her mothers murder she went to live with her grandmother and is making a life for herself in Indigo Valley. She runs a bakery that used to do quite well, but with the traffic re-route none of the tourist traffic comes by her shop anymore and she needs to figure out a way to save it. She doesn't have much, even if her father is rich, but she is happy enough.

Wynn's father hires the company Foster works for to protect Wynn, but doesn't want her to know. They think it is just a poor little rich girl protection gig - nothing serious. They set up fake dating profiles with just people in the company as matches for Wynn to pick from (she doesn't know that of course) to try and get close to her without alerting her she is being followed/protected. She picks Foster out of all of them even though he tried his hardest to not be chosen.

This book was a lot of fun. Foster still has his issues from the past assignment to deal with and Wynn doesn't like liars, which Foster is by necessity. The both of them are attracted to each other right away, but neither of them want to be. Wynn doesn't want to like him, especially when she starts to find out he lied to her, and Foster needs to learn to forgive himself for what he considers mistakes. As I said above it is a quick read so the plot moves fairly fast, a few times it was a smidgen unbelievable but I was enjoying it so much I didn't really care. There were just a few moments when I was like I am not 100% sure that they are there yet, but they are definitely getting there and I will just go with it cause why not. It is fun.

Things heat up both between Wynn and Foster, and with the people out to get Wynn. What Forster assumed was just a fluff job turns into a serious security gig. Foster is so great with everything, protecting Wynn and getting closer to her. I really enjoy the super tough security guy getting the bad guys and protecting his lady books. They are just fun reads and this one was no different. I love seeing what Foster does to keep Wynn safe, love all the ways he tried to keep Wynn away, loved his online profile, really just loved the story. It was a really fun read. I would definitely like to read more especially since this is the first in what will be a series. I can't wait.