By Jen in Bookland - November 16, 2015
Check out the band new cover for Inspire! And the cover of Inflict, which releases in Jan! Aren't they gorgeous? 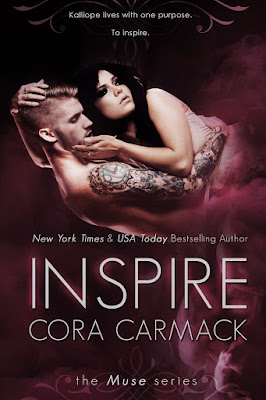 
Kalliope lives with one purpose.

As an immortal muse, she doesn’t have any other choice. It’s part of how she was made. Musicians, artists, actors—they use her to advance their art, and she uses them to survive. She moves from one artist to the next, never staying long enough to get attached. But all she wants is a different life— a normal one. She’s spent thousands of years living lie after lie, and now she’s ready for something real.

Sweet, sexy, and steady, Wilder Bell feels more real than anything else in her long existence. And most importantly… he’s not an artist. He doesn’t want her for her ability. But she can’t turn off the way she influences people, not even to save a man she might love. Because in small doses, she can help make something beautiful, but her ability has just as much capacity to destroy as it does to create. The longer she stays, the more obsessed Wilder will become. It’s happened before, and it never turns out well for the mortal.

Her presence may inspire genius.

But it breeds madness, too. 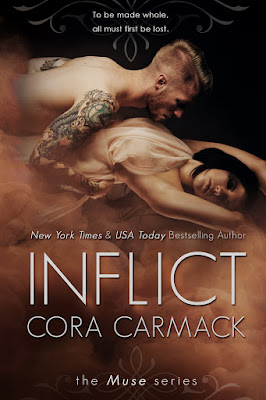 Wilder Bell made a dangerous bargain...

For a chance at love, he gave up his life.

History knew Kalliope as an ancient Greek muse, but to Wilder, she was simply the woman he wanted to fall asleep with every night and wake up next to every morning. He made a deal with Hades, but the only thing the Lord of the Underworld deals in is death. Now Wilder is wasting away in a cold and wretched afterlife, waiting for Kalli to come for him. She will come. He has to believe that. Because the alternative is worse than death.

Kalliope lived her entire existence knowing that she was both a blessing and a curse to anyone she encountered. Wilder was no different. She loved him, and she got him killed. Now to get him back, she’ll have to face a scheming god, a perilous task, and death itself. But before it’s done, the Underworld will take more from her than she ever thought possible.

To be made whole, all must first be lost.

Cora Carmack is a twenty-something writer who likes to write about twenty-something characters. She's done a multitude of things in her life-- boring jobs (like working retail), Fun jobs (like working in a theatre), stressful jobs (like teaching), and dream jobs (like writing). She enjoys placing her characters in the most awkward situations possible, and then trying to help them get a boyfriend out of it. Awkward people need love, too. Her first book, LOSING IT, was a New York Times and USA Today bestseller.
Website ** Twitter ** Facebook ** Author Goodreads ** INSPIRE Goodreads