Hot on Her Heels (Lone Star Sisters #4) by Susan Mallery 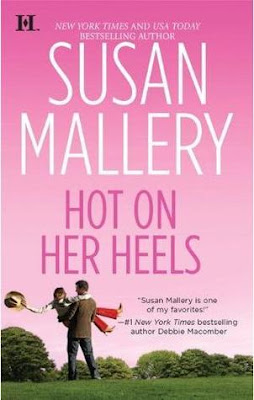 
Sleeping with the enemy just might have its own rewards...

Dana Birch vowed never to put herself at the mercy of a powerful man. She became a deputy so that she could take care of herself, and protect those she loved. Especially her best friends, the Titan sisters.

Twenty years ago, Garth Duncan swore revenge on Jed Titan for abandoning Garth and his mother. Now he s back to fulfill that promise, even if Jed s daughters get caught in the crosshairs. All that stands between him and his goal is Dana, her gun, and a growing passion that can't be denied...

I have been loving this Lone Star Sisters series. Yes, I am reading them all out of order, but I just couldn't wait for the second book to come in at the library before reading this one.

Hot on Her Heels is the story of Dana and Garth. I was really excited for this one. I just knew they would be amazing together. They are both really strong characters. They both like being in charge and Dana especially doesn't like to be vulnerable.

When the story opens Dana does not like Garth at all, only she is drawn to him. He has been after her bff's, the Titan sisters, and she does not like that at all. She doesn't trust him, doesn't really believe that he didn't cause the explosion on the oil rig that hurt Izzy. She is determined to bring Garth down, to arrest him and get him for all the harm he has done.

When the Titan sisters decide that they are going to bring Garth into the fold, going to kill him with kindness and make him a part of the family, they need Dana's help. They want to make sure that he is a good person deep down and not really horrible. They recruit Dana to follow him and see what he is really like. Oh it was fun. Garth is always knocking Dana off her stable footing, doing things that he shouldn't be doing. Inviting her in for dinner, being nice, not minding that she is following him...Dana doesn't know what to think of all of it. For his part Garth is a bit unsure what to do with the Titan sisters as he has never really had that family dynamic. He has never had siblings who care about him so when they just start showing up and being nice to him he is unsure of himself. It is nice, but can he trust it?

The more time Dana and Garth spend together the more things heat up. They both are just great characters. They were just amazing together. I loved this story. I loved how things slowly heated up, how the feelings slowly started to creep in. How they all worked together to take down the bad guy. How this story wraps everything up with the continuous storyline. It was just a really great, fun read. A perfect end to an amazing series.