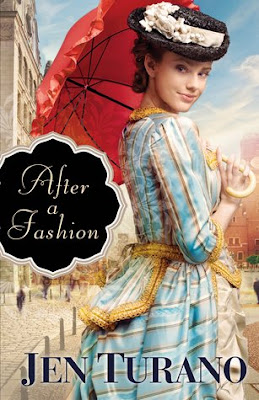 
Miss Harriet Peabody dreams of the day she can open up a shop selling refashioned gowns to independent working women like herself. Unfortunately, when an errand for her millinery shop job goes sadly awry due to a difficult customer, she finds herself without an income.

Mr. Oliver Addleshaw is on the verge of his biggest business deal yet when he learns his potential partner prefers to deal with men who are settled down and wed. When Oliver witnesses his ex not-quite-fiancée causing the hapless Harriet to lose her job, he tries to make it up to her by enlisting her help in making a good impression on his business partner.

Harriet quickly finds her love of fashion can't make her fashionable. She'll never truly fit into Oliver's world, with its fancy dinners and elegant balls, but just as she's ready to call off the fake relationship a threat from her past forces both Oliver and Harriet to discover that love can come in the most surprising packages.

After A Fashion is a zany, old-timey romance. Maybe a little too zany for me. It was a bit over the top and not my favorite read, but it was an alright read. I didn't hate it and there were some good parts that were fun. It just needed to be reigned in a bit at times for me.

Harriet works for a hat maker, but dreams of opening her own shop selling altered dresses she gets out of the collection box to women who don't have much money. Just because they don't come from wealth doesn't mean they don't want to look nice once and a while. She is sent to deliver some hats to Oliver's supposed fiancé and that is where things go a bit south. The fiancé is not really a fiancé, that is just wishful thinking on her parents part, and it gets pretty zany there and just too much for me. The fiancé's family makes sure that she loses her job so she will be at a bit of a loss as to what to do for money. As it is she lives in the poor part of town and doesn't spend much more than she has to.

Oliver is rich and needs someone to help entertain people he is trying to do business with. He thought crazy lady would be a good fit, but she is too much drama. While pondering he realizes he needs someone like Harriet. Someone to keep her head when things get crazy. Someone who he is not in a relationship with so there will be no confusions. Just a business transaction.

Of course Harriet accepts eventually and things don't go as planned. They both start falling for the other, but in the midst of this they have Harriet's Aunt to deal with and other such things. The whole they are pretending to be engaged thing, what others will think, everything. The end was a bit too much for me. I didn't like how everything worked out as it felt like a bit of a cop out. Instead of making some of the characters better people they just made the situation so then it didn't matter about the problems anymore. Lame. I mean it does all work out in the end, I just didn't like how it happened.

One other thing is that Harriets fashion sense and love for making dresses and such didn't play as big of a role as I thought it would. It only seemed to come up a few times and it was a bit disappointing for me. Overall Oliver and Harriet were cute together at times, the story was just too contrived and over the top for me at times. An alright read.