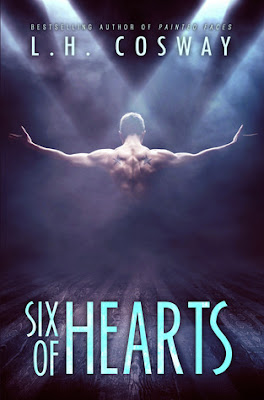 I think in triangles. You think in straight lines.

I show you a table and make you believe it’s a chair.

Smoke and mirrors, sleight of hand, misdirection. I trick and deceive.

But most of all, I put on a good show.

The world thinks I killed a man, but I didn't. Bear with me. It’s all a part of the plan.

She doesn't remember me, but she’s the reason for everything. She’ll be my prize at the end of all this–if I can hold onto my willpower, that is. Maybe I’ll slip up a little, have a taste, just a small one.

So go ahead and pick a card. Come inside and see the show. Look at my hands, look so closely that you can’t see what’s happening while you’re so focused on looking. I’ll be destroying your world from right here in the spotlight.

You’ll never see me coming until it’s too late.

I've only got one heart, and after I've pulled off my grand deception I’ll hand it right to her.

So, sit back, relax, and let my girl tell you our story. You’re in for one hell of a ride.

I have been meaning to give L.H. Cosway another change ever since reading and loving her part in The Hooker and the Hermit. I really didn't like the first two books I read of hers, the guys creeped me out to no end when they shouldn't have, but I loved the guy in The Hooker & the Hermit so I thought why not try her books one more time. I wasn't sure if I would like Six of Hearts, but I was really curious about Hearts of Fire and thought I would read this one first (since it is book #1). I am glad I gave it a go as it was much better than I expected.

Six of Hearts is the story of Jay and Matilda. Jay, a popular illusionist, and Matilda, this awkward girl who doesn't have much experience with men. As soon as Matilda sees Jay in her fathers office she is drawn to him in a weird way. She is not good with men. She doesn't know how to talk to them or anything and she tries to just stay away so she doesn't embarrass herself. She was really cute and made me chuckle. The way she thinks about things was really great.

Jay is this strange, kind of dark, kind of creepy but still someone hot guy who just seems to show up one day. A report has dragged his name through the mud and he wants to sue her and her newspaper and wants Matilda's dad to represent him. He ends up moving into the spare room in Matilda's dads place and it was an interesting read. Obviously Jay likes Matilda, wants to be with her, but he won't let himself. He has a plan, things he needs to do first before he can tell her his secrets, before he can be with her. For her part she picks up on things more than he thought she would, but still tries to get her to not pry. I was just reading along waiting for everything to come out, for Matilda to learn everything and see what happens next.

I enjoyed this read a lot more than I thought I would. It is not a normal romance at all. As I said Jay is a little creepy, a little intense, and a little all over the place at times. There were some uncomfortable moments, but it seemed like they were supposed to be that way.  Some times where I was just like eh...I don't know about this, but somehow it was still like I am digging it at the same time. The back and forth between the two was just very different from most books. I enjoyed seeing the two of them come together even if Jay is not my ideal man. He was good for Matilda so I liked him for her.

Even though I really enjoyed the story more than others of the authors I have read I found the writing itself to be a bit clunky at times. It seemed like some sections were like an outlined turned into paragraphs and kind of tripped me up a little bit. A lot of detail on what happened every day when it was not always needed. Overall I thought it was a good read and I am excited to read Hearts of Fire now. I am hoping that one will be even better!