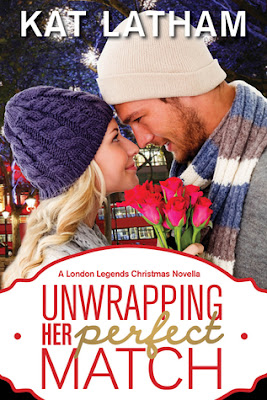 
’Twas a week before Christmas, and at the auction house…

At six foot one, Gwen Chambers has felt like a giant her whole life. She’s a calm, capable nurse saving lives in a busy London hospital, but healthy men give her heart palpitations. When larger-than-life rugby player “Little” John Sheldon convinces her to bid on him in his team’s fundraising auction, she discovers how pleasurable heart palpitations can be.

A rugby player was stirring, with desire no one could douse…

John has wanted Gwen since he first saw her, but when he’s injured in a match just before Christmas he suddenly needs her too. Not only can the sexy nurse help him recover, but she might be able to help him look after his daughter—a shy ten-year-old who speaks only French.

But will it be a Happy Christmas for all, and for all a good night?

From decorating the Christmas tree to ice skating at the Tower of London, Gwen helps father and daughter open up and bond with each other—and she bonds right along with them. But when John’s agent calls with a life-changing offer, Gwen has to decide how far she’s willing to go for her perfect match. Will their first Noël also be their last?

Unwrapping Her Perfect Match was such a fun read. Gwen and John were so cute together! A great Christmas read.

John is a rugby player. A day with him is being auctioned off for the holidays, but as soon as Gwen walks in he only wants her to bid on him. He is really tall and Gwen...well she might be the first girl he has met who just fits. She is taller than average too! Now I will say that all the talk of how tall they were got a bit tedious at times, I was just like I get it they are both giant, but not enough to ruin the story.

Gwen didn't want to come to the auction in the first place. She is not good with people, especially guys. She has a lot of skeletons in her past, people who used her and humiliated her, and she is still not over it. She likes to just hide away by herself, but her sister needs her. That is the only reason she is there. When John comes over to talk to her she is not sure what to do. She is attracted to him, but can she trust that he is actually a nice guy?

John and Gwen end up spending some time together and man it was cute and hot and everything. Gwen's insecurities almost ruin things a time or two, but they both manage to work things out. John also has a daughter from France who he loves, but cannot really communicate with. He is terrible at languages and she doesn't know English so it is hard. When John gets a concussion and needs someone to look after him, especially since his daughter is coming to visit for the holidays, Gwen steps up. She is a nurse and she helps John with everything. She is so sweet and it was so cute watching the three of them become a family. Sure there are things to overcome, issues that come up that could force them apart, but they were great together. I loved this read. Perfect for the holidays! Lots of Christmas cheer from decorating to ice skating to Christmas surprises.