Home for Christmas by Emme Rollins 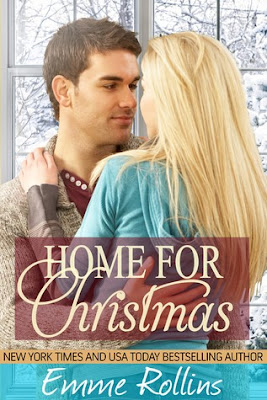 
Alone and on the run, Ginny is desperate to stay one step ahead of danger while still trying to protect her sister and her sister's boys.

Forced from her home and holding the key to a horrible secret, Ginny is haunted by her memories and pursued by a man who will stop at nothing to regain his control over her.

The appearance of a mysterious man in her time of greatest need forces Ginny to decide whether she will take the chance to trust this handsome stranger.

Ginny didn't run far, but hopefully far enough. She has been sticking around because her sister is at a women's shelter with her two sons. She can't leave them, at least not until after Christmas. They are the only family she has.

When Ginny realizes there is a guy following her she is a bit creeped out. This is one part of the story that was not as believable. If she were really so afraid of people finding her, of trusting anyone, it didn't seem like she wouldn't have just trusted Nick like she did, but it was a fun read so I just didn't focus on it.

Through the story you start getting glimpse of what happened to Ginny and how horrible Brody is. You also get more info on who else is involved and some pretty terrible things almost happen. Ginny has a lot to deal with, but Nick is there for her and whatever she needs. Even though she has a dark past Nick wants to give her a bright future for Christmas. A fun, suspenseful holiday read.