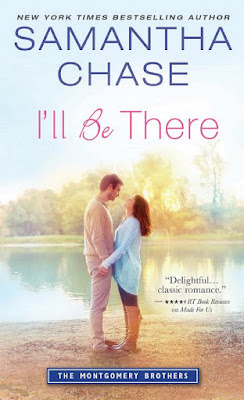 This Montgomery Has a Head for Business

Working for Zach Montgomery is challenging on many levels-coming from a wealthy and powerful family, he lives by his own rules and doesn't answer to anyone. But Gabriella Martine has no intention of backing down. She's used to handling stubborn men, and it doesn't hurt that Zach is smart, charismatic...and gorgeous.

And a Heart for Adventure

Zach's perfect world is turned upside down when a climbing accident leaves him broken, angry, and maddeningly dependent. In his slow quest for recovery, Gabriella is always there to help...but as Zach comes to see his beautiful assistant in a new light, he is forced to re-evaluate what it really means to be a man worthy of Gabriella's love.

I'll Be There is another great read from Samantha Chase. I don't know what it is about her books that I love so much, but I do. Well no, wait, that is not quite true. It is that she makes these characters that I  just can't help but fall in love with. Every new book, every new character, I am just so excited to read. I am always up for finding new beloved friends in these stories.

If you have read Meant for You, Ethan and Summer's story, then you have already been introduced to Zach and Gabriella. Zach was injured on a climb at the end of that story, and this one picks up when he is at home trying to recover. He was always a cranky person, always grumbly and not to nice to be around, but now he is even worse. He is so set on not letting anyone see that he is having problems, that he might need help, that he is not the same person he used to be, he pushes away everyone. He is just giving up, not really living, not really trying, just not in a good spot.

Gabriella is Zach's assistant and has been for years. She used to love working for him, but then one day everything changed. She actually had a huge crush on him until he came into the office one day and had turned into the angry guy she now has to deal with. But she knows him, she knows how to deal with his moods and everything, and she still cares for him. When he had his accident that was a horrible time for her. She was so worried about him, but he was even worse towards her than normal. When his family comes to her asking her to help get Zach back on his feet she cannot say no. Even though he doesn't deserve it she still wants the best for him.

Gabriella is tasked with trying to get Zach involved in his business again. She goes over to his house to try and get him up and running. She is amazing. Really. She puts up with way more than anyone should. Zach is absolutely horrible to her in the beginning. The problem? Well Zach has always had a thing for Gabriella and he doesn't think she reciprocates his feelings. He has been trying to hide them behind his gruff exterior and now he especially doesn't want her around. I mean alone in his home with his very temptation? No good can come of that. Add in that he is recovering and doesn't want anyone to see him struggle, especially not Gabriella, and Zach acts out in horrible ways.

At first it is hard to see how these two will be able to figure everything out and get to their happily ever after. When everything comes out, when Zach realizes that something he thought was true, something he thought happened didn't, he has to take a step back and reevaluate everything. And try to win Gabriella's heart if it is not too late. He did a huge change which was great to see, but still hard to keep up with. He still wasn't perfect, there were still issues to overcome, but he started trying again which was great to see.

For her part Gabriella has some things to overcome as well. Her family is a nightmare and man if I were her I wouldn't ever speak to them either. She still has hangups from things they have said and done and there are some rough patches in the story. There were times when I just wanted to scoop her up and make her see how wonderful she really is. This was a really great read. Zach and Gabriella were amazing together and I didn't want it to end. Once Zach gets back on track he could be really sweet. I loved them both. Another great story from this amazing author. 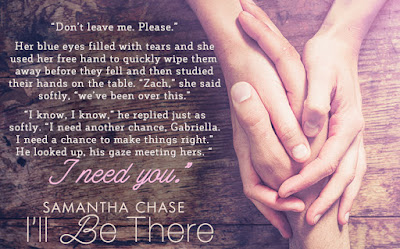 Her words were said so quickly that Zach thought he might have imagined them. “What did you say?”

“It…it was nothing. Never mind. I’ll just plan on seeing you tomorrow.”

“But…it’s crazy, Zach. It’s not like we can get anything done tonight.”

He wasn’t so sure about that. “So? We’ll watch a movie or we’ll start our online research and making our plan for tomorrow.”

“I’m…I’m kind of in my jammies already.”

Was it too much to hope that it was scraps of silk and lace and she’d kept her stilettos on?

“It doesn’t need to be. Come on. I’m not expecting you to come over in business attire, Gabs. I’ve seen you in jeans and dressed casually. It’s not a big deal.”

“I don’t normally drive around a whole lot at night.”

As much as he wanted to see her and spend time with her, he certainly wasn’t going to be selfish and endanger her by making her drive around late at night. If he was ready to drive on his own, he’d suggest going over to her place, but he hadn’t gotten the clearance from his doctor yet.

“It’s okay, Gabriella. We’ll leave things as we originally planned and I’ll see you tomorrow for lunch.” He sighed quietly and got comfortable on the couch. “I don’t want you driving around by yourself late at night.”

He laughed darkly. “I bet it hurt to say that.”

“Oh, stop. We agreed we weren’t looking back, right?”

He nodded. “Right.” God he wanted to keep talking to her but he could hear it in her voice that she was tired. “Why don’t I let you go and get some sleep and I’ll see you tomorrow?”

“Not mad. Disappointed. I’m finding I really like spending time with you.”

She was killing him.

“Go,” he forced himself to say. “Goodnight, Gabriella.”

She made that purring sound again and everything in Zach hardened. “Goodnight, Zach.” 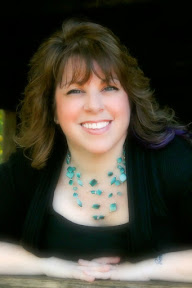 New York Times and USA Today Bestseller/contemporary romance writer Samantha Chase released her debut novel, Jordan's Return, in November 2011. Although she waited until she was in her 40's to publish for the first time, writing has been a lifelong passion. Her motivation to take that step was her students: teaching creative writing to elementary age students all the way up through high school and encouraging those students to follow their writing dreams gave Samantha the confidence to take that step as well.

When she's not working on a new story, she spends her time reading contemporary romances, playing way too many games of Scrabble or Solitaire on Facebook and spending time with her husband of 25 years and their two sons in North Carolina.