The Gift (Fate with a Helping Hand #1.5) by Lisa Mondello 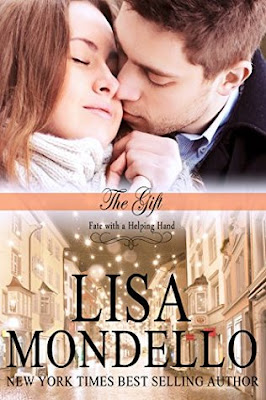 
Allison Jones knows what it's like to want. Or rather, she did. She'd spent the first few years of her life being shifted from one foster home to another, never really finding that special place to make her feel home. When she finds a small envelope on the ground on a side street in Boston, and opens it, her heart plummets. She recognizes the description of the contents and knows what it will mean to the little girl if the promise of this gift is not fulfilled. But when the CEO of Holden Industries, Derek Holden, accuses her of stealing the money inside the envelope, she's determined to go the distance and not only fulfill the gift herself, but to prove to the dashingly handsome millionaire that there is more to life than just money.

The day his family lost their fortune and his world fell apart, Derek Holden swore he'd make his family fortune back. All good things in life came with sacrifice and hard work and he wasn't afraid of it. He'd built a financial empire all on his own and didn't need the simple conventions of life...until he met Allison Jones. The incredibly sweet designer with beautiful hair flowing down her back was much more than he'd originally thought when he'd accused her of stealing the money from the envelope he'd given the courier earlier that day. He'd intended the money to be a small donation to a local charity event. But he soon learned that a bank account full of money was no match for a heart full of love...and there was only one special woman who could teach him.

Yes! The Gift is the first holiday read that is that cheesy Christmas magic that I love so much. I have been a bit disappointed in my holiday read so far, but this one more than made up for it. It was everything I love in a Christmas read.

Allison knows what it is like to be a foster kid and have nothing. She grew up a bit in foster care and even though she had a good life, she still knows what it is like to not really have family. When she finds an envelope on the ground with a card of what one of the current foster kids wants for Christmas her heart breaks. She knows what that is like, what it will mean to that little girl to get a bed of all things. She knows she has to get the gifts herself. She can't just let the girl be disappointed because someone lost the card.

Derek is a well off man who knows what it is like to lose everything. When his father lost everything it completely changed his happy home life to one where everything fell apart. He has been very motivated and built himself an empire. He doesn't want to every lose everything like his family did. When he realizes that he lost the envelope with the card for the foster kid gifts, as well as $1,000, he goes to retrace his steps.

Oh Allison and Derek were fun. At first Derek doesn't trust Allison. He doesn't tell her the envelope is his, but he definitely thinks she stole the money. He quickly realizes that she doesn't have much, but she is determined to find a way to get the money to buy the gifts herself. He is drawn to her. He hasn't come across many people as selfless and kind as she is.

Allison doesn't care for Derek at first. After all he accuses her of stealing! Oh they were fun. They start hanging out a bit and Derek invites her to the big ball where all the foster kids will be and she just can't say no. She remembers how special that night was when she was a foster kid and she would love to see their faces and how happy this one night will make them. Of course there is a bit of Christmas magic that makes them fall in love and everything is just wonderful. I love it. Is it way too quick? Yes. Is it Christmas fun? Yes! This is the kind of holiday read I love. The one where it is Christmas so everything works out and it is wonderful.