Her Christmas Wishes by Lorraine Nelson 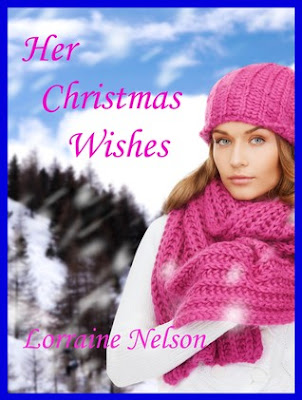 
Erica London needs some time alone to figure out if she should continue with the in vitro treatments. They haven’t worked so far. She really wants to have a baby and an heir to the ranch…to know he or she was on the way before Christmas. Of course, wishing for a man to love her and produce said baby would be wonderful, but that’s not about to happen. She rides over to the London Lodge, situated on the back end of the London Ranch, to clean and close it down for the winter. A freak blizzard has her snowed in, but she doesn’t mind in the least. She has food, shelter, and wood fires to keep her warm. Besides, she enjoys not having the phone ringing or wranglers stopping in to chat.

Spencer Rafferty is on his way to his brother’s wedding when he takes a wrong turn and ends up on a side road. His car hits a nasty drift and barrels into the ditch. With no signal on his cell phone, he looks around and all he sees is white. He smells wood smoke but can’t determine where it’s coming from. Then, in a moment of clarity when the wind dies down, he sees the smoke and walks down the road toward it.

Erica opens the door with gun in hand, unsure whether or not to allow the stranger in. But the storm is a raging blizzard and she takes pity on him. When not covered in snow, she sees just how handsome the man is…and he’s not wearing a ring. When the power goes out, things heat up. Could this man be the one to make her wishes come true? Did she have it in her to embark on a weekend affair? And could she survive his leaving when the storm was over?

Her Christmas Wish was not a very good Christmas read. The best thing about it was it was short so it didn't take much time to read. Even though it is a short read there will be spoilers ahead. The story was just not my favorite, and I don't know how to show that without talking about what I didn't like i.e. spoilers.

Erica is desperate for a baby. She has been trying in vitro fertilization, but it hasn't been working. She needs some time to think things through by herself, so she heads off to the lodge that is closed for the season. If only she could get pregnant for Christmas!

Spencer is a famous author on the way to his brothers wedding. When he misses his turn and gets stuck in a snowstorm he ends up on Erica's doorstep. Lucky for him Erica is so attractive! It won't be a hardship at all being stuck by themselves in the lodge!

Of course since this is a short read they both are pretty instantly super attracted to the other. They gets some chores done, some misunderstanding out of the way, and then it is just days of sexy time. And surprise! Erica is a virgin! Yes, somehow her hymen is still in tact and she bestows this special gift on Spencer. Yes, he is just so attractive she cannot help herself! She has never been attracted to anyone else ever so lucky her he showed up at her door. And when the protection thing comes up, namely he doesn't have any, she is just like it's cool, I'm clean, don't worry about it. Yey! I am glad he never once thinks about how she can get pregnant...And that is like all she thinks about. How lucky would it be if she could have Spencer's baby? If only.

So then the snow stops falling and the roads are cleared and Spencer must leave. Five weeks later and no word from him, but Annie is happy as she might be pregnant! Yey! So her whole baby frenzy, the wanting to have his baby without even telling him, I did not like at all. If he didn't show up on her doorstep would she have let him know? I doubt it by the way she was thinking which is just wrong. I did not like her I'm going to try and have his baby no matter what thing. Not cool. Anyways he shows up all I love you, I missed you, will you marry me? Of course she says yes to which he is then like well go take that pregnancy test you tried to hide from me when I walked in and see if you will make me even happier! Wait what? You have only spent a few days with this lady having sexy time all day and now you suddenly want to be married with a kid on the way? Okay. Sure. Whatever. I am done, and so is the story so...really not my favorite read.