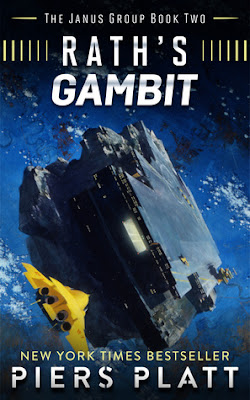 Rath just assassinated a senator, and completed his final mission for the Janus Group. Now every Interstellar Police officer on Alberon is searching for him. If they don't find him, one of his fellow contractors certainly will … and the most feared criminal organization in the galaxy has severe punishments for employees who break the rules. Rath's only hope is to find the rogue contractor who helped him escape a company deathtrap after his final mission. United, the two assassins might just get free from the Janus Group and get what they're owed. But first they'll need to survive.

*Note: I received a copy of this book in exchange for an honest review. Also you should have read Rath's Deception already as this is a continuation of the same story.

Rath's Gambit was such a fun read. I am loving this series. One of the things I love most about this book is it is Rath's story. I love that he is not this perfect assassin even though he has had training. He has a crazy memory, he can't forget anything, but doesn't always think things through completely. As such he gets himself in situation that he then has to try and find a way out of. Oh he was fun. I love that the hero of the story is not this perfect person. He is human, real, even if he has had assassin training. He has to kind of fumble his way through things when they don't go exactly as planned.

At the end of the first book we were left with Rath making his escape from the men who showed up to collect his implants and everything. The men who were there to kill him since he completed his jobs. He had set up and executed a plan to do just that, escape, though it doesn't go exactly as planned. All of his nano bots didn't get out of his bloodstream. Most, but not all. That plus the company can still track him through his database means he still has some things to deal with before he can meet up with the only other assassin he knows who made it to 50 kills.

Through this story you see some of the character from the first book show up again, plus the company searching for both him and Paisen/Contractor 339. Rath needs help to try and find Paisen and hopefully she has a plan to get them both out of this mess. He just wants to be left alone, but he knows the company won't stop trying to find him.

You also get to learn more about the company, who is involved and why they started it. I can't wait to read more and see how this all works out. That and getting to know Paisen more...I really liked her. She is a great character and if anyone can take on the company I think it is her. She does not have as big a storyline as I had originally thought, but I still loved reading what was happening with her. You also have the cop from the first book who feels terrible for things he thinks he did. Even when things get bad he still sticks to his cop duties, still tries to work everything out in the way he was trained to do. Really I loved reading all of the characters storylines. It is hard to know who you can trust and when you see the reach of the company...it seems like it will be impossible to stop them.

Really this book is a lot of fun. I love all the different people's stories we get to follow. This part ends in much more of a cliffhanger than the first one and I cannot wait to see what happens! It really doesn't look good, doesn't seem like they will be able to get out of this mess and take the company down. Alright I need to get reading the next book (releasing Jan 1) so I can see what happens! Such a fun read!!