The Unlikely Romance of Kate Bjorkman by Louise Plummer 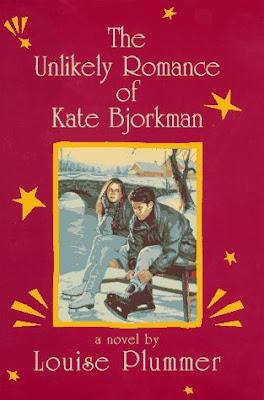 Hi, I'm Kate Bjorkman. What do you do if you've lived a real romance with a great guy and he loves you as much as you love him? Simple, I wrote a romance novel with help from THE ROMANCE WRITER'S PHRASE BOOK. Nothing is made up. I want truth and conflict even in romance. I'm betting you'll want the same.

The Unlikely Romance of Kate Bjorkman was an interesting read. Most of the time I thought the whole schtick was cute, but sometimes it got a bit tedious. For example after some chapters there is a "Revision Notes" chapter and those I could have done without. For the most part I just skimmed them as they were tedious and didn't add a lot that I cared about to the story.

This story was an interesting idea for a romance novel. Take the author/main character and make her tell the story as if she is writing it talking to herself and the reader at times. She comments on what should be included at this time in a normal romance and whatnot. She has her handy dandy romance writers phrase book to look at for inspiration when describing things and it was humorous at times. For example she goes on about breast at one point and how there are so many different descriptions for them.

"I hardly ever think of breasts ever, and here they are just bursting out at me from every page of the phrase book."

It was fun, and at first I really was enjoy it. After a while though the whole schtick got to me. So the premise of the story? Kate is an average looking girl, taller than most and wears coke bottle glasses that magnify her eyes. She has had a crush on her brothers bff, Richard, forever and he comes home with the brother and another girl for Christmas. Things change and the Kate and the boy fall in love. Pretty straightforward romance with the interesting style. For the most part it was a good read. Kate's one bff is the worst, and you wonder why Kate is even friends with her. She ever writes how you will be questioning it just as you are which again was an interesting idea. The friend, Ashley, threw herself at Richard every two second even though she knew Kate was interested in him. She is written like she throws herself at every guy so Richard is not really different. He tries to hold her off though.

So most of the book was okay, cute romance read, but the end? Oh the end completely ruined it for me. Don't read on if you don't want to know what happens. Okay so before Kate and Richard get together Ashley ropes Richard into going to the annual New Years Eve party with her. Kate had already said she would go with an exchange student so she wasn't free to ask so Richard just said okay to the bff. So once Kate and Richard get together why don't they call off their respective other dates? Why doesn't Richard at least call off his date with the Ashley since she is horrible to be around? Everyone knows she will just be all over him the whole night, Kate is not friends with her anymore, why would she push Richard to still go with her? I didn't get that at all. It made absolutely no sense. Why wouldn't Richard refuse to go with Ashley? He knows what will happen! Why would you want to put up with someone throwing herself at you all night and not getting the hint? And Kate? You know your friend is just going to be making a pass at him all night, it doesn't matter if she knows you two are together or not, so why would you want to just stand around and watch that? Lame. But whatever, Richard can just keep shutting her down right? Right.

Until he doesn't. Until Kate sees Ashley trying to get Richard to make out with her, sees the friend kissing him and at first he tries to push her away, but she is adamant about it. Then he finally gives in and starts kissing her back. Yep, Richard cheats on Kate with her once bff who he doesn't even like. Yeah. Great guy that one. You two have been together for like a week and already he is making out with someone else. Sure the other girl started it, but you're telling me you couldn't put a stop to it? Seriously? And Kate is obviously upset, won't speak to him for a few days, then he does something small that makes Kate just melt and forgive him. Ugh. Maybe this would be okay if they worked it out in a better way or if they were going to be together at college or something, but no they are going to be in two different places. So I am expected to really trust that if some other girl throws herself at Richard he won't give in? I mean really there would be no other option if some girl started kissing him. He would just have to give in and go with it as...yeah I didn't like it at all. So it is not even a happy ending. I couldn't even pretend that they would be together much longer. Not good.

For as much as I thought the rest of the story was cute the end with the cheating and lame reconciliation just ruined all my good thoughts about the book. It was an interesting idea, but not really a great story.