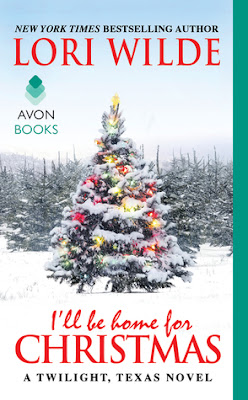 Nothing says Christmas like New York Times bestselling author Lori Wilde and Twilight, TX, and now Lori returns to Twilight for a brand new heartwarming holiday tale. The matchmaking members of the Cookie Club are up to their old tricks again!


Christmas in Twilight, Texas, is all merriment and mistletoe. The Cookie Club is whipping up their most festive sweets, the townspeople are scrambling to get their holiday shopping done, and Joe—a hometown guy with a restless heart—is dreaming about the woman he wants to kiss most...

...And who happens to be staying at his sister's place over the holidays, while Joe's sister is away. But Joe isn't quite sure he wants to be a living Christmas present to runaway law student Gabi Preston.

Joe thinks the sassy sweetheart he nicknames "Trouble" won't inconvenience anything but his healthy sex drive. But when he discovers the reasons Gabi escaped from her life, he aches to give her everything she's never had. As the magic of the season draws them together, the gift of love is the only one worth giving…

I'll Be Home for Christmas was a cute Christmas read. I love reading the small town Christmas celebrations!

Gabi has never really had a real Christmas. Her brother died on Christmas day when she was young and since then her parents just immersed themselves in their work. They never made much of an effort to make the holiday special for her, but she has always held out hope of one day going to a small town where they do Christmas right and experiencing it all. She used to talk to her brother about doing just that, so when she befriends someone online who lives in just such a town who wants to do something different for the holidays they decide to switch places. Gabi will live in this girls place and this girl will live in Gabi's for a few weeks and they will both get what they want.

Gabi was a sweet girl, but she has always just done what other people wanted. She never really expressed her opinion about things, didn't want to rock the boat at all. She was partly trying to do everything her brother wanted to do and never got to and partly just trying to keep everyone happy. She is a people pleaser, but she has been following everyone else's dreams for herself for so long that she doesn't really know what she wants. She knows it is not what she has been working towards (she just quit school), but she doesn't know much else. She doesn't really know herself.

Gabi is determined to use this few week break to really figure out who she is and what she wants. She just wants to experience Christmas and all the fun that goes with it and then go back to her life with a bit more perspective. She doesn't count on her friends very attractive, very nice, brother who lives next door.

Joe is a sweetheart. He is one of those people who will help you in any way he can without a second thought. He is just a good guy. When he meets Gabi he is attracted to her that is for sure. He tries to stay away, tries to not get involved, he has enough stuff going on, but he can't help himself. She is just so nice and they get along great.

Really Gabi and Joe were sweet together though they don't have it easy. What starts out as potentially a holiday fling that turns into more. Joe's past comes a knocking and intrudes for quite a bit, but Gabi still manages to fit in with all of that. They just don't get as much alone time as they might otherwise have had. They slowly grow closer, but with Gabi's moving back to LA looming can they figure out how to be together forever? Joe is not really in a position to move, but if Gabi does will she just be pleasing other people again? She really has a lot to try and figure out. She wants to make sure she is doing what she wants and not changing herself for others again. This is where the book got a bit long at times for me. I understand why she would be hesitant, especially when you find out more of her family details, but it got a bit bogged down at times with her thinking and trying to figure everything out for so long. That plus the end was a bit cheesy, but it was still fun. I mean there is a bit of Christmas magic which I do love.

The story was a bit too touching for me at times, but overall it was a good read and I think most people would really enjoy it. I did love the Christmas magic and reading about a small town where they really do the holiday right. A cute read.
*Note: I received a copy of this book in exchange for an honest review.


New York Times and USA Today best-selling author, Lori Wilde has sold seventy-eight works of fiction to four major New York Publishing houses. She holds a bachelor’s degree in nursing from Texas Christian University and a certificate in forensic nursing from Kaplan University. She is a member of the International Association of Forensic Nurses.

Her first NYT bestseller, the third book in her Twilight, Texas series, The First Love Cookie Club has been optioned for a television movie. The town of Granbury, Texas, upon which her fictional town of Twilight, Texas is loosely based, honors Lori with an annual Twilight, Texas weekend each Christmas. www.twilighttexas.com

A popular writing instructor, Lori is a two time RITA finalist and has four times been nominated for Romantic Times Reviewer’s Choice Award. She’s won the Colorado Award of Excellence, the Wisconsin Write Touch Award, The Golden Quill, the Lories, and The More than Magic. Her books have been translated into 27 languages and excerpted in Cosmopolitan, Redbook, Complete Woman, and Quick and Simple magazines. She lives in Texas with her husband, Bill, and her two New American Shepherds.
Website * Twitter * Facebook * Goodreads