Wrapped Up In You (Mystic Island #1) by Stephanie Rowe 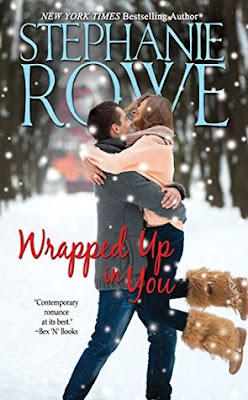 New York Times bestselling author, Stephanie Rowe, unveils her heartwarming new Mystic Island series, where love always finds a way in this enchanting coastal Maine community. In Wrapped Up In You, can a moonlight kiss from twelve years ago heal two hearts that no longer believe in love?

Haunted by his tragic past, Cole Charbonneau has returned to Mystic Island to sever the final ties to the place he once loved so dearly. His only goal is to walk away forever, until a woman from his past winds up on his doorstep, needing from him the one thing he can't give.

After a heartless betrayal by those she trusted dearly, Willow Morgan has escaped to Mystic Island, hoping the magic of an island Christmas will heal the emptiness in her heart. The last thing she wants is love, but Mystic Island has its own plans for her…and they include a kiss she'd almost forgotten and the devastatingly handsome business mogul who touched her heart so long ago. Can she afford to fall for him a second time?

Wrapped Up in You was a sweet Christmas read. Willow is returning to Mystic Island for the holidays in the hopes of finding the same feeling she got the last time she was there when she was younger. She always thinks of her short time there as this magical time when she could just be herself and she really needs that now. Her life is a bit crazy and she doesn't have anyone she is really close to and she could use some time to relax and recharge.

Cole is coming back to Mystic Island hopefully for the last time. He needs to fix up the old inn that is in his family. He had a lot of good times on the island, but a lot of not so good as well. He hasn't been back in a while, but he wants to get in and get everything squared away so he can sell the hotel and severe his ties to the island for good.

When Willow shows up on Cole's doorstep needing help things get more heated than either of them expected. Neither of them are looking for love, they both have to leave the island, but when they realize they shared a magical kiss twelve years ago they both start to wonder if they could get that same thing they had then now. Things were just easy and perfect between them, but how can they make things work now when they are in two different worlds?

Through the holidays these two spend more time together and grow closer. Can the island's holiday magic give them the happily ever after they didn't know they were looking for? It was a cute read. I would love to go somewhere like Mystic Island for Christmas. It sounds like so much fun.