Bleeding Hearts Duet by A Zavarelli 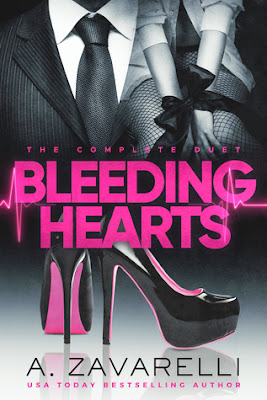 How far would you go to save someone you love? Would you give up your body? Your mind? Your heart?

I did and it cost me everything.

He says he owns me. And it’s true.

I’ve signed over complete control of my body and life for six months to a man I don’t know. Five years he’s been planning this. They say revenge is a dish best served cold. But my blackmailer serves it up white hot. He’s addicted to my innocence, and I’m addicted to him.

He likes to hurt me. I love to let him. He brings me to life. He sets me free. He makes my heart feel things it shouldn’t.

But he also scares me. He holds the fate of my brother’s life in his hands. A life behind bars for crimes I know he didn’t commit. My blackmailer can’t give up his revenge on my family, and I can’t be with him if he doesn’t. But I’m nothing more than a butterfly caught in his net. Do I really have a choice?
Review:

The Bleeding Hearts Duet was a fun read. I really enjoyed Brighton and Ryland's story.

Alright, the first part of this duet, was...yeah. I did really enjoy this read even if there were moments when I was like really Brighton? But it was great.

Brighton's twin brother went to prison for a crime she is sure he didn't commit. She feels terrible that he is rotting away in there and would do anything to help him. When she receives an offer of freeing her brother in exchange for handing her life, body, decision, everything over to a stranger for six months she doesn't think that long about it. She is certain she can do this so her brother can finally get out of jail. After all, he is a great person and doesn't deserve to be in there.

Ryland is a guy Brighton first met briefly when she was 16, and now she works for him. She is strangely drawn to him even though he is older and she doesn't know why. Now 21 she has fantasies of getting down and dirty with him, but he doesn't seem to remember that kiss they shared forever ago.

When Brighton finds out Ryland is her mystery monster things are a bit rocky, but they work themselves out. Only Ryland is definitely keeping things from her, he won't talk about himself much, his past, anything really. She falls for him hard, but she doesn't even know if he is in this for more than their arrangement or if he cares for her as well.

Now Brighton's brother also doesn't tell her things. She doesn't know why he pleads guilty to the charges brought against him when she is certain he is innocent. She doesn't know what he was getting up to before he was sent away and he won't tell her. Add in her "friend" Nicole who is obviously part of this with Ryland, and co-worker Matt, who knows more than he will tell, and she is left in the dark by everyone. By those who claim to care about her. Man, I don't know how she put up with it. Really, I wouldn't have. Because if you really cared about me you would tell me what was going on. But it was a fun read. Super hot sexy times and Ryland and Brighton were good together. You can see he cares even if he doesn't want to. He is not all monster.

No Brighton does make some stupid decision towards the end of this first part, some things that I was just like really Brighton? You are going to stick with this even after you learn everything? You can't understand why someone would act the way they are acting?

Then on to the second part of this duet. Now I was hoping that Brighton wouldn't just forgive everything and be a doormat, and luckily she wasn't! Ryland definitely makes some mistakes with her along the way, but then he learns from them. He doesn't want to keep making them. He wants to fix things and be with her because he does love her. And she is not perfect either. It wasn't easy with these two, but I really loved this second part of the story. The two of them are perfect for each other if only they can work everything out. Don't want to say too much more as I don't want to spoil anything, but it was a fun read. Through all the ups and downs these two were great. They are imperfect people, but they try and be better than they are. Together they can be. I loved it.