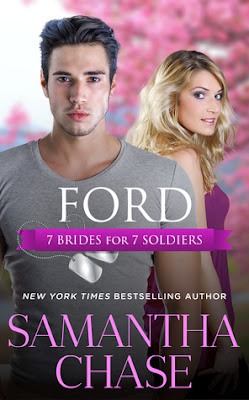 There are three things Ford Garrison wants more than anything: to build, to report to no one, and the chance to live his life without the prying eyes of the good folks of Eagle’s Ridge. Having spent ten years in the Navy as part of their construction battalion, he was able to live out most of that dream. Two out three wasn’t bad, right? Now that he’s out of the service, things aren’t falling into place quite as easily as he hoped and he ends up back home with all eyes on him.

It wasn’t as if Callie had gone out of her way to end up in Ford’s path, but somehow that happened all on its own and the town gossips were having a field day! Could she help it that she was living in the house Ford had hoped to claim as his own or that the work on his grandmother’s ranch meant they were living not fifty-feet away from each other?

Ford was determined to come home, do a job to help his grandmother and leave. Callie James is a distraction and she represents everything he has spent years running away from. Now he’s at odds with his friends, his family and himself about where his home and future are going to be.

Could he walk away from Eagle’s Ridge a second time?

Ford left his hometown of Eagle's Ridge as soon as he could. He couldn't wait to get out of his small town and the prying eyes of everyone that lives there. He hated how everyone knew everything you did. He wants his privacy. So he joined the military and now he lives across the country and only comes home when he has to. And his trips home are quick in and out type things. He doesn't want to catch up with everyone and have everyone stare at him while he is there. He has some good friends that live there, but he won't ever come back to stay.

When Ford's grandmother gets in a bind he comes right away to help out. He has some work he needs to do on her house and he is hoping it won't take too long. After all he has a job to get back to. Only it looks like her house needs more work than he thought. Plus there is Callie to think about...Callie who is living in the guest house and who he can't stop thinking about.

Callie was the daughter of Fords grandparent's housekeeper. He remembers seeing her around at times, but she was a few years younger and he never really knew her. But Callie definitely remembers him. She had a crush on him when she was younger, and man now the crush is back full force since he is back. I mean he has grown up to be an incredible man. How could she not still crush on him?

Callie was super sweet. She is one of the kindest people. She does what she can to help Ford out in whatever he needs. Cooking meals for him and his crew, calling people, whatever he needs she tries to help. Because that is just who she is. I really liked her. She was so sweet.

Ford is a pretty great guy as well. He doesn't have the best relationship with his parents since they keep hassling him to move back and take over his grandfather's company, but he can't do that. He can't live in this town. Only maybe he can...maybe if he gets out of his own way he could figure something out. He could be happy with Callie and doing work that he loves in a place he does love.

These two were really cute together. I really loved how Callie understood Ford and never pressured him to stay like everyone else in his life seemed to. She wanted what was best for him and if leaving town, which would leave her broken-hearted, was best for him she wanted that for him. Because as I said she was the nicest. The two of them together just worked and it was the story of if they could get everything figured out it would be pretty great.