ARC review: Everything the Heart Wants: A Novel by Savannah Page 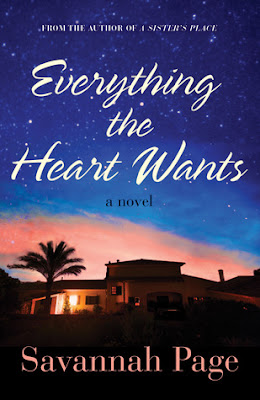 Writer Halley Brennan couldn’t dream up a better love story than her own. Married for eleven years, she and her husband, Adam, are still living their happily ever after. They both know what they want—and don’t want—for their life together. And that includes being child-free. But when one of them has a change of heart about wanting a baby, it brings their marriage and life plans into harsher focus.

Devastated that this bombshell might destroy their relationship, Halley finds comfort in her closest friends: Nina, who’s finally pregnant after years of trying; her sister, Charlotte, an overwhelmed mother of three; and Marian, a successful businesswoman who regrets letting go of her one true love.

Now, with their guidance and support, Halley begins a painful journey of self-discovery. As she searches her heart to make a life-changing decision for both herself and Adam, she realizes that someone is bound to get hurt. Will their perfect love be too great a sacrifice for everything her heart wants?

Everything the Heart Wants was a great read. I don't think I have ever read a book with a main character that was so me in this way. We are first introduced to our main character, Halley, when she is telling us a bit of her history. How she has never wanted kids, never, how she would bring that up on the first date with guys she dated to make sure that that was okay with them before things get serious. Because if they really want kids it wouldn't work out. Better to find that out before you fall in love and start planning a future and realize you both want different things. Because kids? They are a big deal. There is not an easy way to compromise with kids. If you are not on the same page then one person must put aside their wants for the other. Which could be not so good in the long run depending on the situation/relationship/people involved. And that is me. I am so Halley in this way. I have never wanted to have kids. I brought it up right away with anyone I dated because it is a big deal. It really is a deal breaker for some people. And I got lucky to find my husband who is totally on board with it just being us. We love our life as it is. I love my friend's kids, I am super happy for them that they have the family that they want and it is great. I just don't want that for myself. So I got Halley. Everything she said about how she met her husband and how her life worked out up until this point I was just like yes! Exactly! Yes! It was pretty awesome because like I said I have never encountered a character like that in one of my books. It was refreshing to read. Something different.

Only what happens when one person in the relationship changes their mind? What happens when you are still super in love, but one person now wants a baby? When one person goes back on that life of no kids that was agreed upon? Man, this was a rough one. And it was a bit...intense for me to read. Nerve-wracking and really shook me up. I will be honest it made me a little paranoid that maybe my husband would change his mind and then what would I do? Because I am still firmly in the no kids boat. As I was reading I was afraid to go on, but couldn't put it down at the same time. I didn't want to see what would happen because as I said kids are a big deal. How can two people make that work when they want different things? It...it really made me think about what I would do in that situation. It would be hard. It is really a difficult situation.

Throughout all of this, through Halley trying to figure out what to do now that the plans have changed, you also have a few side stories. Mainly Halley's sister who is having a few bumps in her marriage as well (I love how the author had this play out. What was going on and who was involved and all of it) and Halley's friend who has always been really surface level with guy because she let the love of her life go when she was younger and now regrets that. Really I think I could have read a whole book about both of these characters and what happens with them. The sister would be another tough read, but one I gladly would. And Marian's could be a wonderful second chance romance if everything worked out the way she wanted. But it was nice seeing the strong friendships and people who were there for Halley when she was having troubles of her own. When she was trying to figure out what to do in her own marriage now that it is not what she always thought it would be.

I really enjoyed this story and it was surprisingly uplifting at the end. I really wasn't expecting to come out of it feeling so good about everything. I was sure while reading that it would be a downer, but instead I was left feeling so hopeful and positive. It was a really great read. I can't wait to read more from this author.