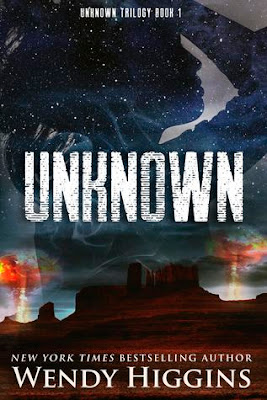 Amber Tate believes the worst thing she’ll suffer in life is dealing with the unrequited love she feels for her brother’s best friend, Rylen Fite. She also believes war is something unfortunate that happens places far, far away from her rural Nevada town. She’s wrong on both counts.

When an unknown organization meticulously bombs major cities in the United States and across the globe, a trickle-down effect spreads to remaining towns at an alarming speed—everything from food and water sources to technology and communications are compromised. Without leadership, the nation is split between paralysis and panic, but Amber isn’t one to hide or watch helplessly. She’s determined to put her nursing skills to use, despite the danger, even if it means working alongside the man she can never have.

In this first installment of NY Times bestselling author, Wendy Higgins’s debut New Adult series, a frighteningly realistic apocalyptic America is brought to life, entwined with searing romantic tension that will leave you eager for more.

This story started off not so good for me. It was history of Ambers life up until whatever happened. Her brother Tater, their neighbor/her brothers bff/her crush Rylan and her bff Remy. It was all just told to you and it...it was kind of boring to read honestly. I was trying to get through that part so we could catch up to the present and it could stop sounding like a story being told to me after the fact. Only when we get to the present it was still written like that. It was alright, but not my favorite writing style.

So the story idea itself is interesting. And as it went along there were some parts near the end where it was a bit intense and I was like eek! What is going to happen?!?! And when it ended I was a little curious where the story would go, hoping the next book would be better, but overall it was just okay.

My main problem with the book was the characters. I have only read the authors Sweet Evil series prior to this and I absolutely loved that series, loved the characters, so I was surprised that these characters came off more...childish and not like adults? Incredibly stupid at times? It was a bit much. The worst by far was Remy. I know she is supposed to be a wide-eyed optimist, believing the good in everyone, but come on. How long can she think the people rounding people up, using some bad people in society to help their cause, killing indiscriminately, are still good. She sees them bomb a flipping "camp" where they rounded up everyone left alive and forced them to go (our main characters managed to escape) and still is well it could be okay. People leading the charge might not know what is going on. They have always been good people so they are probably still good. Really? They just killed your family and everyone else that was left in your town and you are still not sure the world is being run by bad people now? Okay.

But it was everyone. There kept being instances of things happening that screamed something is not right, and yet no one would question them. Amber was angry with the doctor when she was getting her vaccine and didn't want to say who she was attracted to, but then suddenly she is calm and blurts it out? She doesn't think that is odd? Or Rylan when he did the same thing? Or when Rylan and Tater tried to save their grandpa and then just moved out of the way against their will? No one is going to question that and say hey something odd is going on here? Really I don't understand why they didn't leave after they killed the grandpa. Why go to the town meeting and plan to leave after that? I didn't get it. They were all a bunch of idiots at times, completely oblivious to the weird things that were happening. Or maybe not oblivious, but not really thinking about it or trying to do anything sooner. Except the grandpa - he knew what was up! He was ready to go!

They also seemed to be able to just roam around the dessert mountains no problem. Like...I don't know. They said about shooting something for dinner and Amber was like you can't set off a gun! And they were just like eh - we are miles away. It is fine. Now I am sure the shot might echo depending on what the mountains are like so you might not be able to get an exact location, but still. It seems like it might let the bad guys know at the very least that there is someone with a gun somewhere out there! I don't know. Plus why aren't the bad guys looking harder for them when they know they escaped being rounded up?

Oh one other example of the them being not so smart - the military was basically shut down and sent home (and probably most of the higher ups killed) and then an air force jet comes and the main characters see it and think yey! Finally the military has arrived! But then the air force jet bombs the "camp" and are confused as to why the military is killing everyone. It takes them WAY too long to think that maybe the bad guys are using the jets for their own use. I mean they took over control of everything so why wouldn't they use the air force planes?  It made no sense.

So yeah I liked the idea of the story itself, but the characters could get on my nerves. That and they didn't quite feel real and it was just an okay read for me. Like I said at times it was intense and I couldn't put it down, but overall just a meh book. Sad as I expected more from this author. I still am going to give the second book a try to see if, hopefully, it gets better.