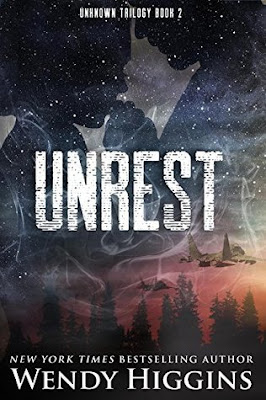 Being on the run in the desert means food and sanctuary are hard to come by, but Amber Tate and her crew are not about to give up. Not after having so many of the things they love brutally ripped from them by an unknown enemy who sent their world into the apocalypse.

Survival takes precedence, but once safe shelter is found, their guards fall and the emotions they’ve been holding in are finally released. Anger, insecurities...lust. In their tight quarters, Amber, Rylen, Tater, and Remy can't escape it. The past must be faced, and passions run even stronger in the darkest of times.

In the midst of unrest, their worlds are rocked again when they discover the truth about the war that’s ruined their lives. They thought finding out the enemy's identity would give them the edge; instead it’s revealed terrifying dangers they never thought possible.

Man somehow Unrest was even worse than Unknown. At least in that first book you didn't know what was happening, but Unrest? Ugh. It was painful to read. *spoilers ahead*

Unrest is a continuation of the story that started in Unknown. I didn't really enjoy that one, but didn't hate it enough to stop reading. I was hoping this story would get better as it went along, but it didn't. All of the characters are still just as stupid as they were. Especially Remy. Are there really people who have never heard of military time or don't know how to make time from 12-hour increments to 24 hours? Like they have never heard of the idea of 24 hour time? Never heard 24 hours in a day? Nothing like that? Apparently so...I just...the stupid hurt.

So in this installment, we have the gang traveling to a base that was in a morse code signal they heard on the radio. And getting there took forever and I wanted it to be over. I thought that would be the hard part of the story, but then they got to the base and Amber is just a super jealous awful person when there is a lady there who seems to like Rylan. And she gets super pissed every time she sees them talking even though they work together. She is just like he is not ready bestest friend stay away!! And the other lady is like he is a big boy, he can make his own decisions little girl. I swear Amber acted like she was 12 and it was so so so annoying. Then we find out that she finds it REALLY difficult to talk about things. Anything. Ugh. Did not like. I understand it can be hard, but Amber was sooooo annoying!! She can't seem to say two words about anything at times. Ugh. Especially not to Rylan as it was just lame teenage angsty drama rama.

So they spent a good chunk of the story underground at this new base and it was kind of boring. It was just the jealous Amber show, but she wouldn't do anything to let Rylan know how she felt either. Even though he kept giving her GIANT clues that he liked her, she was still poor me! That other girl likes him and I can't do anything but cry myself to sleep like a little kid because other girl likes him. I know I was told she has a hard time with words, but I just wanted to grab her and shake her like come on! Woman up and do something or stop your whining. Seriously. Apparently, all the guys liked her and Remy, but they were stuck on Rylan and Tater so the other guys didn't have a chance *que huge eye roll* There was a bit of action at the end, but the rest of the story was pretty predictable and felt so high school drama not twenty-something end of the world that it should be. Maybe the last book will wrap everything up better? I doubt it, but we shall see. I have made it this far might as well see how it all ends.