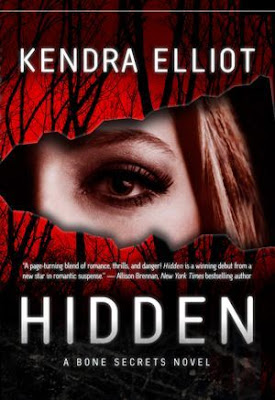 Now a forensic odontologist analyzing teeth and bones for the state medical examiner, Lacey is devastated when she identifies Suzanne’s remains at a crime scene. She finds comfort in the arms of ex-cop Jack Harper, and sparks fly between them even as a new reign of terror begins. Someone is killing the witnesses who sent the Co-ed Slayer to prison a decade ago. All the evidence points to the Co-ed Slayer as the culprit, only he’s long since dead. So who’s the new killer? And is Lacey next in line to die?

Hidden was an interesting read for me. At times I was really engaged and loving it, but other times it was dragging on. There were also a few things that the way they were written really bugged me. Overall I would say it was an okay read, but I enjoyed it enough to read the next book in the series to see if I enjoy it more. I like the idea a lot, the execution just was off at times. *some slight spoilers ahead*

Hidden is the story of Lacey, Jack, and everyone involved in trying to find a killer. A killer who everyone thought they caught and is currently dead. Is this the real killer, did they get it wrong, or did he have an accomplice? Someone they didn't catch before? And why is he coming out of hiding now? And taking out everyone involved in putting the killer away?

The story starts off with Lacey at a crime scene to examine the dental work of some remains. She is a forensic dentist and I thought that would be a lot of fun to read about. Kind of like Bones the TV show, but just the teeth. And it was, but it wasn't in the story very much. Still Lacey was an alright lead for this story. She comes across as strong at times, but other times she is super weak so it was odd. Like sometimes she still had issues from what happened so long ago, but sometimes she is perfectly fine. It didn't really ring true all the time, but I didn't mind it that much.

Jack is a retired cop and owner of the building where the remains were found. He also dated one of the victims, but way before she was murdered. He is now drawn into the investigation and wants to find out what is going on and why. Plus from the first moment he sees Lacey he is drawn to her. When it becomes apparent that someone is out to get her too he wants to do everything he can to protect her.

Now through it all the two of them grow closer and fall for each other. That is also interspersed with chapter from other characters points of view. From the cops working the case, the killer, anyone that needed a chapter. And while I enjoyed reading this story, how everything turned out I didn't like so much. The way it worked, how Lacey was involved and other people who knew her, was kind of lame. Like if there are so many people looking out for her and they know the killer is gunning for her why would they do what they do? They would really be that stupid? I didn't buy that. At least that is not how I would have handled things, but if you didn't do it that way you also wouldn't have had a big showdown finale so....

So overall this book was just an okay read. It had some high points, but it also had some parts that didn't sit right with me. For example one time a cop had to talk to some ex-cons, one of which is gay. After he talks to him the cop has a


"desperate need to exercise his heterosexuality. He'd taken a break and dashed down the block to flirt with the baristas at Starbucks. Now back to work and sipping on a venti coffee, he felt cleansed."


Really? So talking to a gay guy makes you need to reassert your heterosexuality and "cleanse" yourself? Really? I did not like that at all. And there were a few moments like that where I was just like really? This is how we are playing this? Not good. But they were only here and there and didn't completely ruin the story for me.