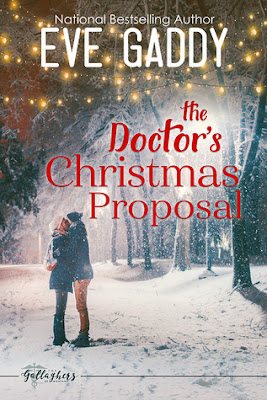 Betrayed by his ex-fiancée, Dr. Wyatt Gallagher turns to the one woman he can always trust – his best friend, Mia Watson. After moving away, Wyatt has realized he wants more than friendship with the beautiful artist. With that in mind, he convinces Mia to come to Marietta for the Christmas holidays. But wooing Mia is surprisingly difficult — especially given the passionate night they’ve already shared.

Though Mia Watson has loved Wyatt Gallagher for years, he's always seen her as a friend, never a lover. Except for one unforgettable interlude when comfort turned to passion. Then Wyatt moved back to Montana, leaving Mia with an unexpected consequence of their night together--and soon, heartbreak to follow.

Faced with the fulfillment of her dreams, Mia knows she must reveal the consequences of their night together to Wyatt. But having withheld the truth for so long, will her confession destroy his trust in her, ending their friendship and any hope of a future together?

The Doctor's Christmas Proposal was my first fun Christmas read of the year! I love Christmas romances. Love them. And this one was really cute.

Mia has loved Wyatt for years, though they have only ever been friends. Except for that one night when he seeks comfort from her when he is betrayed by his ex-fiance. And Wyatt has always turned to Mia when things get rough. She is always there for him and he never realized until that night just how much she means to him.

So now it is a few months later, Mia hasn't heard much from Wyatt since he moved back home pretty quick after their one-night stand. So she thinks it meant nothing to him. I mean why would it have? He had been drinking and she has to try and protect her heart and move on. With someone who sees her as more than just a friend.

Wyatt has realized that he wants Mia as more than a friend, but he is unsure of how she feels about him. He had to take some time and get his head straight after his ex had him not really trusting people. He dated a few girls in the interim, but it never worked out. Mainly because they weren't Mia. So when his brother is getting married days before Christmas and his other brother is having a baby he thinks this is the perfect opportunity to get Mia to come visit him. And maybe with all the holiday cheer and festivities, he can convince her that maybe she likes him as more than a friend. Maybe they can make this work between them. Because he misses her and wants her in his life, but he has to convince her of that first.

Now Mia is hiding something from Wyatt. Something she meant to tell him sooner, but just never did. It was easy when they were living in different cities and hardly talking, but now that she is staying with him and he seems to want to be more than friends she has to figure out what to do. How to tell him even though once she does that would put an end to him ever wanting to be with her. I really enjoyed this story. I loved Wyatt and how dedicated he was to Mia, but Mia was a bit...annoying at times. She was all doom and gloom and kept coming up with reasons why things wouldn't work between them. I loved when Wyatt finally had enough and it is just like look, if you don't want to be with me that is fine but just say so. Stop putting roadblocks in our path that aren't really there as nothing you come up with is that important in the long run. We can figure this out if we want to. It was like yes! Thank you!

Overall this was a sweet read. I loved Wyatt and watching these two figure everything out.