Reaper (Boston Underworld #2) by A. Zavarelli 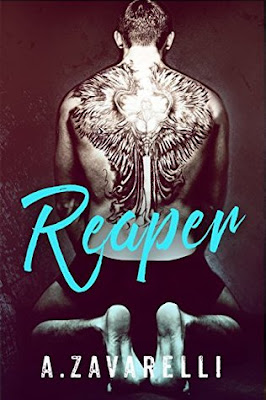 He’s dark and mysterious. Quiet and lethal.
An Irish mobster.
Pure sin wrapped up in a beautiful package.
But there’s also something off about him.
He doesn’t feel anything. He shows no emotions.
Sometimes I question his humanity.
He hasn’t spoken to me in two years. Not a single word.
But we share a secret, he and I.
And if it ever comes out, I have no doubt in my mind…
He won’t have a problem killing me too.

I’ve slain for her. I’ll do it again.
When it comes to Sasha, there isn’t a line I won’t cross.
I watch her. She doesn’t know it.
She thinks I hate her. Sometimes, I think I might too.
But I’m always there, lurking in the shadows.
Craving her. Trying to keep the beast within at bay.
I’ll keep her safe. I’ll slaughter anyone who tries to hurt her.
The only thing I can’t do… is protect her from myself.

Reaper was amazing! I loved this story so so much! I have been on a roll recently reading amazing books and this was another one to add to the list. Oh, I loved Ronan! He was the best!

Ronan and Sasha have a secret. Something happened two years ago and if anyone found out if could be bad for both of them. Plus now Sasha thinks Ronan hates her since he won't talk to her. Not that he talks a lot, but he will occasionally say something to everyone but her. She has a lot on her plate and dealing with Mister silent sexy guy is just another thing to add to the list. Her mom is sick and dying, her sister hates her, she has been through more than someone should have to go through to keep her family safe, but they will never know. She was wonderful and gave up so much for those she loved. As soon as her mom passes she wants out. She wants to get far away from the Irish Mob as she can. She can't stay here...can she?

Ronan had an absolutely horrific childhood. He doesn't really know things most other people do. He is not at all experienced with women, he doesn't do well with emotions, he is great when someone tells him what to do, but if he has to figure it out himself he won't. I loved him so so much. He was...I loved how he wanted to understand things, but he just didn't. Like he gets a dog at one point and he has to take care of it. Only he doesn't know how. Someone tells him the dog is hungry at one point so now whenever he sees the dog do the same thing he thinks it is hungry. So he feeds the dog. Only she also wants love and attention. She liked Ronan and oh it was adorable! Him learning to be more human, the normal things we all take for granted, made me swoon.

Because of his dark past Ronan doesn't speak much. He also doesn't trust easily and he doesn't like people touching him. He is the guy the mob turns to to kill people and get information from. He doesn't mind doing it, but once he meets Sasha he thinks he can never be with her since she would hate what he does and who he is. These two don't talk much, but they both like the other. There is something there between them and if they could figure out how to communicate they might be able to figure this all out.

I loved this story. I cannot say enough good things about it. Ronan and Sasha were wonderful together. She doesn't judge him for the things he does/who he is and he always is there to try and protect her. Oh, Ronan, you stole my heart. Through the ups and the downs these two try and fight their way through. It was wonderful. Go. Read this story. it is amazing.