Escape from Olympus (The Falken Chronicles Book 2) by Piers Platt 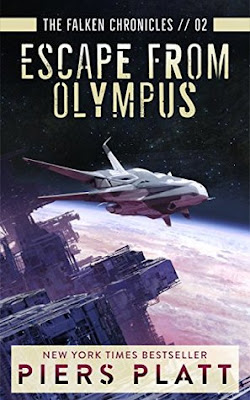 After his escape from the prison colony Oz, Sirio Falken has found a new life as a safari guide on the planet Olympus. There, he helps tourists navigate the planet's exotic ecosystem, which is dominated by a single apex predator: a long-lived and sightless avian species called dragons. With exceptional hearing, the dragons are feared for hunting down anything that moves, including Falken and his guests, if they’re not careful. But unknown to Falken, criminal elements have plans to use him to plunder the planet's resources, whether he's willing to help them or not. He'll have to keep the lethal dragons at bay long enough to unravel a growing conspiracy … and escape from Olympus.

If you haven't read Piers Platt before you really need to. Seriously. His books are so. Much. Fun!! I love them and can't get enough.

Escape from Olympus is the second book in the Falken Chronicles but could be read as a standalone. You wouldn't have the backstory from the first book, but that is okay. You should read the first one anyways cause it is great, but I don't think you need to in order to enjoy this story.

Man this book was so much fun. I loved it. I couldn't put it down once I started, which my husband didn't appreciate since I started it on a short train ride when we were on vacation and all I wanted to do was read the rest of the day then until I finished! At least he knows me well enough to know I get like this sometimes...and doesn't mind too much.

In Escape from Olympus Falken is working on the planet Olympus. Or rather on a ship above the planet Olympus. The planet it inhabited by dragons that can very easily kill you in really terrible ways. You don't want to be stuck on the planet and try to survive them. He works for a tourism company where you can take a virtual reality tour around the planet and walk among the dragons. The goal is to see how long you can survive before they kill you. And you see and feel everything like you are really there. I can't imagine. That sound awesome! How crazy would it be to feel like you are really on this planet being hunted by these dragons? To feel like you are dying in terrible ways? Of course you can always come out of it whenever you want, but man. I so want to do that! I Want to see how long I would survive. In all honesty it probably wouldn't be long, but I would love every minute of it.

Now this is all fine and dandy, Falken loves his job, but of course there is more to the story. One of the things I love about this author's work is how he layers the characters. How you get the story from a few different points of view and it is not always obvious how each plays a role in what happens. How you sometimes have to wait until the end to see how it all ties together. All of the characters are so much fun, even the bad guys. I don't really know what the bad guys were thinking in this one cause it is intense, but so much fun to read. This second book is definitely more action packed than the first one. Everyone gets into some dicey situations and I couldn't put it down. I so enjoyed this story and the world this author created. I wanted to be a patron of Falken's business. Even if it meant I had to fly into outer space, which is probably my biggest fear, I wanted to be in this world. I wanted to experience this! Well maybe not everything that happens in this story, but Olympus Safari? Sign me up!

Overall this is a great read. Lots of action and adventure, lots of cool ideas, and dragons! Who doesn't love dragons? Go read this book. You won't be sorry you did.