Blog Tour: Dating-ish (Knitting in the City #6) by Penny Reid 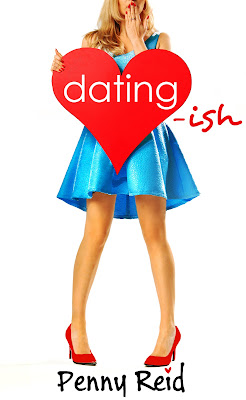 There are three things you need to know about Marie Harris:
1) She’s fed up with online dating,
2) She’s so fed up, she’s willing to forego the annoyance and consider more creative alternatives, and
3) She knows how to knit.

After the most bizarre and irritating first date in the history of human kind, Marie is looking for an alternative to men. With the help of her friends, she quickly identifies a few possibilities:

Need a cuddle? Use a professional cuddler. Need affirmation? Get yourself a life coach. Need an orgasm? Try orgasm meditation! Why does she need the hassle of a romantic partner when she can meet all her needs with paid services?
But then her irritating date resurfaces. And he’s not at all the person she thought he was. And he suggests a different—and crazier—solution to her dilemma . . .
As everyone knows (or will soon come to realize), traditional relations between humans are a thing of the past. Robots are our future. And if robots are our future, then why do we need other people at all?

Dating-ish was such a fun read! A great addition to this series and I loved it!  If you know Penny's previous books, if you have read the prior books in this series (not a requirement, but you should read them at some point as they are awesome!) then you know how amazing she is. How she writes these awesome characters and stories that are not like everyone else. This story was just as fun and awesome! Plus it has robots!! Or talk of robots at least. And who doesn't love robots? People I don't want to know! just kidding...kind of.

This is the story of Matt and Marie. Matt who is freaking adorable and also freaking hot! How is that possible? I don't know. He is a bit awkward, he is working on making a robot to replace humans for those who need it, and he was so cute. I loved him. Until he changed and turned up the heat and then phew! Nerdy robot guy has the moves! I love love loved Matt. I get where he is coming from and why he is how he is and wanted nothing but the best for him. He was so sweet and oh, he killed me!

And then there is Marie. Marie the forgettable one. In prior books I know she was there, but thinking back about the group of ladies I don't really remember her. And this may sound bad (but it isn't), but she is still kind of forgettable to me. In a good way. If that makes any sense. In the group of friends that the author created she is normal. She doesn't have some crazy thing about her, nothing outstanding really, which I enjoyed. When she is in with the likes of Janie, who is super quirky and I love it, and Fiona, who is a ninja (!), Marie does fall to the wayside a bit, but I enjoyed that. I don't know that I am getting this across the way I want, but I liked that she was normal. She was looking for love but getting fed up with the process. Especially after her last meeting with someone from the online dating website. What a disaster and she is ready to give up for real. She already was, but man that last guy was a real doozy. Who needs men when you can get everything you need from strangers?

Now these two don't start off on the right foot which was fun. Marie thinks she knows Matt and how terrible he is, but when they start working together, when they start hanging out, it was so much fun! Marie sees who Matt really is and ack! These two. They were so much fun. I loved this story. I loved reading about the professional cuddlers and guided orgasm therapy and everything in between. The story is funny but also gets you in the feels. I love the sweet, cute, adorable that turns into really hot and sexy. Go read Dating-ish. It is not your normal romance which makes it even better. 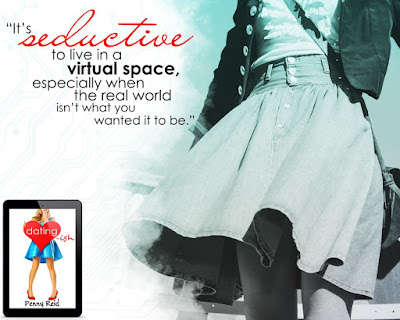 He was quiet for bit, we both were, and I felt myself relax more and more. His palm took a detour every so often, dutifully skipping my hip and sliding along my side, and then back to my leg. Soon, I was so relaxed I felt drowsy.

I felt fingers in my hair, moving the mass away from my neck with treasuring strokes just before Matt nuzzled the back of my neck, causing goosebumps to scatter over my skin.

“Does this tickle?” Matt asked softly, nuzzling me again. I felt the brush of his lips—not a kiss, a brush—paired with hot breath against the bare skin of my neck and a zing shot straight down my spine, making my toes curl and a sudden hot ache twist in my lower belly.

I knew that ache. I hadn’t felt it because of another person’s touch in quite a long time. Nevertheless, no one ever forgets that ache.

My back arched instinctively, my bottom pressing back against his crotch, and I stiffened. I felt my nipples harden, strain beneath the cotton of my bra. I was now fully awake. No longer drowsy.

Not even a little.

“Are you okay? What’s wrong?” he asked, alarm coating his words, and in the next moment his hand was suspended in the air above me. “Did I touch something I shouldn’t?”

I exhaled a short, nervous laugh, gripped by the urge to sit up.

“No. No. You didn’t.” I moved to the edge of the bed, righting myself, away from Matt, needing distance. “I’m good.” I gathered a silent breath and released it slowly because my pulse was racing.

Crap, Marie. Get a grip. It’s Matt Simmons. Professor Matt. The big kid. Why are you reacting this way?

“Did I . . .” These initial words were hesitant, and a moment of silence stretched before he continued, his tone comically teasing as he finished his thought. “Did I arouse you?”

I snorted, shaking my head, laughing at his silly tone. Turning at the waist to peer at him over my shoulder, Matt was grinning at me, twisting a make-believe mustache between his thumb and forefinger.

But then he stopped.

“I did, didn’t I?” he pushed, his hand dropping. He looked pleased, if not a little amazed.

I sighed, feeling a smidge embarrassed, and nodded. “Actually, yes. That’s a sensitive spot for most women.”

“The back of your neck?” He lifted himself to one elbow, his eyes darting to my neck with keen interest.

“My neck in general, actually.”

“Huh.” Matt frowned thoughtfully. “Where else?”

I pressed my lips together and gave him an incredulous look. “I’m not telling you that.”

“What if I needed it for research reasons?”

“What if I told you it was part of our questionnaire?” He tossed his legs over the side of the bed and stood, walking around to my side and offering me his hand. “You should give me a schematic of your body with the erogenous zones circled and rated.”

“Let me guess, you want them rated on a ten-point scale,” I deadpanned as I accepted his hand, stood, and stepped away to gain some distance and straighten my shirt.

He shrugged, crossing his arms, stalking after me. “Or exponential. I was going to say a Likert scale, but a logarithmic scale works, too.”

Chuckling, appreciative of his attempt to diffuse my embarrassment and awkwardness with the joke, I realized Matt Simmons wasn’t a bad guy. He might even be a good guy, just a little . . . peculiar.

And wants to replace romantic relationships with robots. Best not forget that detail.

“Thanks.” I gave him a small smile.

“For what?” His eyes moved between mine.

“Anytime, Marie.” He grinned down at me, his eyes dancing as he leaned forward and whispered, “Anytime.”

Penny Reid is the USA Today Bestselling Author of the Winston Brothers and Knitting in the City series. When she’s not immersed in penning smart romances, Penny works in the biotech industry as a researcher. She’s also a full time mom to three diminutive adults, wife, daughter, knitter, crocheter, sewer, general crafter, and thought ninja.