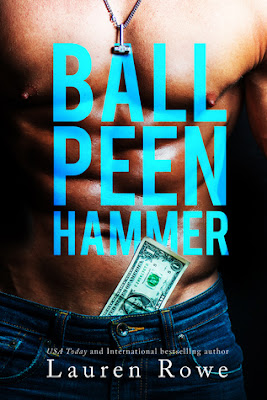 Keane Morgan wouldn’t return any of my calls or texts, and I was pissed as hell about it. I didn’t want to drive from Seattle to L.A. with the guy any more than he wanted to drive with me, but I had no frickin’ choice in the matter--at least, not if I wanted to use his brother Dax’s coveted parking spot at UCLA.

Okay, so it turned out Keane was objectively gorgeous, and, fine, pretty funny, too. But did he have to be so damned in love with himself? I mean, jeez, the cocky way he flashed those dimples was just so orchestrated. And, honestly, what kind of guy uses the phrase “baby doll” with a straight face? Oh, that’s right: the kind of guy who’s a male stripper.

Yup, the cocky jerk turned out to be Seattle’s answer to Magic Mike, a stripper known as “Ball Peen Hammer”--which meant Keane Morgan was emphatically not the kind of guy I’d ever fall for.

Well, until Keane convinced me to fall for him, that is.

Although Keane and Maddy’s love story is set in the universe of The Club Series, it is a standalone novel with no cliffhanger and no prior reading required. Due to strong language and sexual content, this book is not intended for readers under the age of 18.

I'll let you in on a little secret. I really thought I was going to hate this book before I started it. I thought no way would I like a conceited jerk male stripper who calls people baby doll. It won't be for me. I thought I would read a chapter or two and then DNF it. Cause yeah not my thing. At all. So why did I start reading it? Because the author is going to be at a signing I am attending soon and I am trying to read something from every author. Though I have too many authors to go so I am DNF-ing anything that doesn't catch me right away. So nothing sounded interesting, I needed a book to read, so I thought this would be a good way to check another author off the list.

Only I loved this story so so so much! I stayed up way too late reading it because I couldn't put it down. Oh my goodness this book is amazing! Seriously I never thought I would like someone like Keane. A cocky stripper, but oh he is so much more.

Ball Peen Hammer is the story of a male stripper and the super sweet girl next door who go on an epic road trip and fall for each other. And I loved every minute of it. The first chapter from Keane's point of view I admit I did think I don't know about this. He is doing his stripper thing and super cocky talking to the reader and I thought eh. But the first chapter from Maddy's point of view was fun and so I read on. And it got better and better and better. Keane was so...he is hard to describe. Really. One of a kind. He is that cocky stripper, ladies man, hook up with whoever, women fall at his feet, but he is also funny and kind and sweet and silly. As Maddy says

"He is the sweetest asshole-pig-narcissist I've ever met. Adorable. Gentle. Silly. Easy to talk to."


I never thought I would like someone who calls people baby doll and sugar lips and things like that. But Keane was different. He does that, but he is so much more. I can't even with this guy. I don't know how to explain him. You should just read the book and get wrapped up in the world of Keane and Ball Peen Hammer. Seriously it was one of my favorite stories I have read thus far this year. So unexpected and it blew me away.

Besides Keane you also have Maddy. Sweet adorable fun Maddy. She is normally a bit quiet and awkward, usually doesn't warm up to people quickly, but with Keane she is instantly at ease. She is his biggest cheerleader and they grow close. She was so much fun, so smart and motivated and going to do great things. Now if only these two can figure out how to be more than friends. Or really, if Keane can figure his stuff out. Because these two belong together. They were great and I didn't want this story to end. So so good. Cannot say enough good things about this story. Just go read it even if it doesn't seem like your thing. It might surprise you by how awesome it is. Who knows, maybe you will fall for Keane just as hard as I did.