Hook Me (Men of Inked #2) by Chelle Bliss 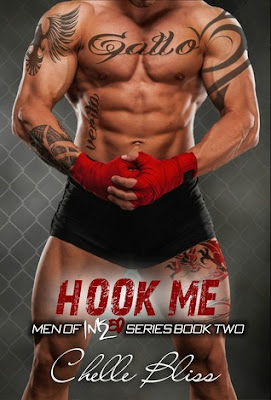 Michael Gallo found his calling in life – he wants to kick ass. He works at Inked as a piercer, but spends his mornings training and dreaming of winning an UFC championship. Michael is the road to achieving his goal when a chance encounter alters his world forever. The title is no longer enough – he must capture the woman of his dreams.

Dr. Mia Greco is dedicated to saving lives and helping those less fortunate. She doesn’t have time to meet Mr. Right with her busy schedule. She buries herself in her work and helping humanity. Fate steps in and sweeps the carpet out from under her. She tries to deny the pull to him, a man that uses his fists for gain, but the universe won’t let her walk away so easy and Michael isn’t one to take no for an answer.

He has a secret that may rip them apart. There are forces bigger than them at work; drawing them in and making their worlds collide – not letting either one of them walk away.

Did I read a different book from everyone else? This story was a hot mess for me. It needed an editor to make it more coherent. I felt like the conversations often didn't make sense and the same conversations were repeated again and again and again. I don't know how many times Mia was told Michael is part owner of a tattoo shop and a fighter, each time like it is new information. Or how Mia gets stressed out working in the ER and would love to work at the clinic full time, but they can't afford to offer her full time employment. Every time it comes up Michael asks again why she doesn't just work at the clinic full time like they had never had a conversation about it before. It was confusing to say the least. Oh, about the clinic one more thing. Michael's family is wealthy so he mentions having his family donate to the clinic so she can work there full time. Her first thought? What she immediately thinks? What did your parents do to make this money because if it was from illegal means she can't accept it. What? Really? Why oh why do you think they got rich in illegal ways?? Yes, they are Italian so that means they are in the Mob? Really? Ugh. I hated stuff like that in this story. It made no sense. Maybe if Michael had hinted at it or if she knew his family name in association with bad things then I could see it. But no, she just assumes because they are Italian that they are part of the Mob. They couldn't have made their money in normal ways...

Really Mia is very judgmental and stereotypes everyone. I hated it. Not only the Italian thing, but with everyone. Oh, if I didn't know them I would think they were super stupid meatheads who couldn't string two words together. Oh, this person looks like this negative thing, this person is like that even though I don't know them. I hated all the judgment based on nothing!!

So if all that wasn't bad enough we also have a big chunk of drama at the end. Michael's ex Tammy is crazy. Like seriously crazy. She works at the same hospital as Mia and one day she goes crazy on Mia how she is stealing her fiancé and shows her her ring and everything. Oh and Tammy is apparently pregnant with his baby. Michael knew Tammy was crazy and claiming to be pregnant, which he didn't really believe, but was trying to figure out what to do about it if she really was. Why didn't he tell Mia any of this sooner? Because then we wouldn't have this pointless drama! Okay so Michael tries to get Mia to listen to him, tell her how crazy Tammy is and how they are not engaged and everything, but Mia won't listen. She just keeps thinking how Michael was cheating on his fiancé even though he is adamant that she is not his fiancé. Then Tammy shows Mia their engagement photos...and yeah. It is just their heads on different bodies and totally crazy pants. So does Mia think oh, maybe I should call Michael? Maybe he wasn't lying because Tammy really is unhinged? Maybe they are not really engaged? No, she STILL thinks they are really engaged!!! It made NO SENSE!!! When you see how crazy Tammy is, just like Michael keeps claiming, why for the love of all things won't you listen to Michael?!?! Seriously. It was too much. It made no sense. None. The whole second half of the book was just me yelling at Mia and wanting to throw the book across the room. Not good. Not good at all.