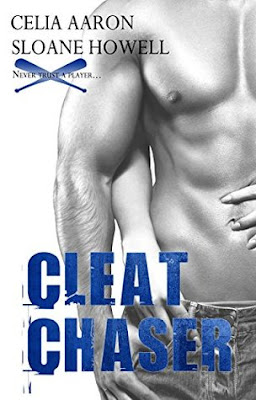 Kyrie Kent hates baseball. She hates players even more. When her best friend drags her to a Ravens game, she spends the innings reading a book… Until she gets a glimpse of the closer—a pitcher who draws her like a magnet. Fighting her attraction to Easton Holliday is easy. All she has to do is keep her distance, avoid the ballpark, and keep her head down. At least, all that would have worked, but Easton doesn’t intend to let Kyrie walk so easily. When another player vies for Kyrie’s attention, Easton will swing for the fences. But will Kyrie strike him out or let him steal home?

Cleat Chaser was not for me. I know, I know. I don't know what I was thinking reading this story. I thought it wouldn't be for me, wouldn't be my sense of humor, and I was right. I could just finish this review right there. It is not my sense of humor. *Some spoilers ahead if you decide to read on*

So I started off this story a bit hesitant to read it as I didn't think I would enjoy it. Only I did like the first chapters. Kyrie and her bff at the ball game, Kyrie freaking out because she is attracted to Easton and she can't do anything about that (she dated a ball player before and doesn't want to go there again as it was not good), Easton liking her right away as well and the two of them start to get together. I enjoyed all of that, but then it got to be too much for me. It got to be way too violent which I did not like. I hated Easton's sister. I know it is supposed to be "funny", but no. I couldn't do it. Their relationship is abusive and I don't find that humorous. The first time we meet her she hits Easton as hard as she can because he left a dish in the sink or something. Not like a fun, playing around punch on the arm kind of hit. No like a whiffle ball bat to the privates because he left a dish in the sink. That and she is very crass in a way I don't like and yeah. I hated her and couldn't stand reading her. I didn't find her funny.

Easton gets violent as well. Not against Kyrie or anything, but he loses his temper and destroys things. Not cool man, not cool. When Kyrie's ex shows back up he beats him to a pulp. Which upsets Kyrie and when Easton asks her if she still has feelings for her ex what does she do? Says nothing!! Not one word!! She doesn't even look at Easton. Apparently she loves Easton so much she can't say anything about the loser who was trying to hook up with her that she doesn't like anymore. Nope, why say anything when you can be a blooming idiot and stay quiet and we can have some more drama llama! Yey! It was bad. Really bad.

Oh and Kyrie's job woes? Ugh. I just wanted her to grow the f up and put on her big girl pants and do something! Not everything will fall in your lap! Sometimes you have to work for what you want! Do something!!! Just because you messed up doesn't mean you can't fix it. Yeah, much better to just be all woe is me, my life is terrible then actually say or do anything to change it. Oh, it was annoying. Super annoying. I can't stand whiny people and Kyrie was one of the worst. Too much drama for drama's sake when it didn't need to be there, too whiny, too not my sense of humor. It was a mess for me. Not a fan.