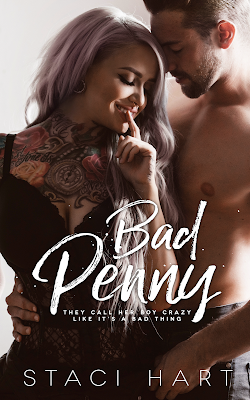 Nothing good comes after the third date.

See, date three is the crucial point when things get real, which is exactly why I bounce out the door, twiddling my fingers at whatever poor boy I’ve left behind. Because if I stick around, one of three things will happen: he’ll profess his undying love, he gets weird and stalky, or I’ll go crazy. Like, Sid and Nancy crazy. Like, chase-him- through-the- streets- begging-him- to-love- me crazy.

Seriously, it’s better for everyone this way.

So when I meet Bodie, I figure it’ll be the same as it ever was. It doesn’t matter that he doesn’t put a single string on me. Doesn’t matter that he’s funny and smart and jacked and can play my body like a grand piano. Because even though I’m built for love, love has only carved me up like a Christmas ham.

Resistance is something I can only hang on to for so long, and he has persistence in spades. But my heart isn’t as safe as I want to believe, and neither is his. And the second I ignore my cardinal rule is the second I stand to lose him forever.

Bad Penny was a cute read. Now I'll be honest it did take me awhile to warm up to the story. Or really to warm up to Penny. She was...her topics of conversation were a bit much for me. Or too much the way she talked about it. No judgment, it is fine if you talk like that/enjoy the way she talks, but it was just eh for me. Not my favorite. Though slowly but surely she won me over. Plus Bodie was freaking amazing and I loved him right from the start! Another great read from this author.

Penny has rules. No dating past the third date. That is when things get tricky, when strings get added, and she does not want strings. She tried the whole boyfriend thing before and someone always gets crazy. Either she gets crazy, which she doesn't want, or they get crazy, which she also doesn't want. Though when she meets Bodie things start to get tricky anyways. Can she really keep seeing him past the third date and not have strings? Can she really keep her heart out of it when she is so attracted to him and he is kind of perfect? Will she risk it to see what will happen?

Bodie is so freaking adorable and sexy and smart and hot and amazing! Seriously he is like perfect. Perfect for Penny, perfect for...well just perfect. He is patient, he knows if he comes on too strong he will scare Penny away. He never thought he would actually have a shot with Penny, but to do so he has to play it right. He knows she will get scared away if he just professes his love or something, so he is happy seeing how far this can go. Ultimately he will be with Penny forever, but if not then he at least will have as much time as he can with her. I loved Bodie. He was the best! Seriously. He knew exactly what to do and how to give Penny when she needed even if she didn't know it. He didn't get all possessive or jealous or want to keep her down. In fact he wants her to fly, wants her to stay the same as she is now. Only with him in her life as well. He never wants to hold her back, but breaking down those walls can take time. Will he be able to? Will he get is happily ever after?

These two were so sweet together. I know it started off so so with Penny for me, but I loved her with Bodie. They were so hot together! And so much more. This was a really fun read.

Staci has been a lot of things up to this point in her life -- a graphic designer, an entrepreneur, a seamstress, a clothing and handbag designer, a waitress. Can't forget that. She's also been a mom, with three little girls who are sure to grow up to break a number of hearts. She's been a wife, though she's certainly not the cleanest, or the best cook. She's also super, duper fun at a party, especially if she's been drinking whiskey. From roots in Houston to a seven year stint in Southern California, Staci and her family ended up settling somewhere in between and equally north, in Denver. They are new enough that snow is still magical. When she's not writing, she's reading, sleeping, gaming, or designing graphics.
Connect with Staci: