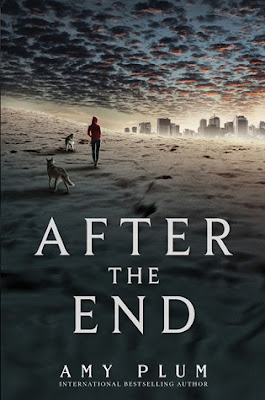 She’s searching for answers to her past. They’re hunting her to save their future.

World War III has left the world ravaged by nuclear radiation. A lucky few escaped to the Alaskan wilderness. They've survived for the last thirty years by living off the land, being one with nature, and hiding from whoever else might still be out there.

At least, this is what Juneau has been told her entire life.

When Juneau returns from a hunting trip to discover that everyone in her clan has vanished, she sets off to find them. Leaving the boundaries of their land for the very first time, she learns something horrifying: There never was a war. Cities were never destroyed. The world is intact. Everything was a lie.


Now Juneau is adrift in a modern-day world she never knew existed. But while she's trying to find a way to rescue her friends and family, someone else is looking for her. Someone who knows the extraordinary truth about the secrets of her past.

After the End was a fun read. I liked Juneau a lot and the way she could connect with nature. It was fun to see where it would all go.

Juneau grew up believing the world was destroyed many years ago and their little outpost in Alaska is one of the only remaining groups of people left. They have great respect for nature and have lived pretty much cut off from everything. It is all Juneau has ever known. Until she comes back from a hunting trip one day to find everyone gone. Taken by some men to who knows where. And she is the only one left to find them and save them.

When Juneau realizes how she has been lied to over the years it is not that good. She still has to find her clan, but how can she trust people anymore? And how can she connect with nature like she used to if everything is a lie? She was great. I really enjoyed watching her discover the world and talk to the plants and animals surrounding her. How she was happiest out in the middle of nowhere instead of in a big city. How she was trying to figure out what was going on, who was after her and why.

Along the way she picks up Miles as a guide and helper in her quest. Now my one small negative about the book is that I never really felt like I got to know Miles. Not like Juneau. I know I was told the things he did and how he was, but I never really felt it. So sometimes I didn't understand why he was doing the things he was doing. It was fine, I just wish there would have been a bit more to him so I could have known him as well as her.

Overall this was a really fun read. Now I have to move on to the next book and see what happens!