Where the Road Takes Me by Jay McLean 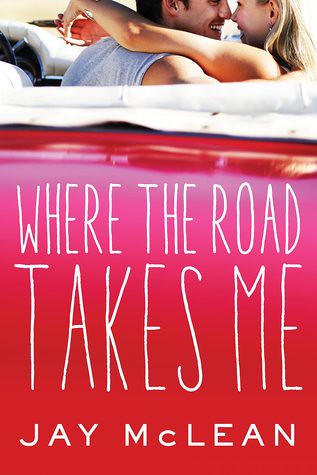 
Chloe has one plan for the future, and one plan only: the road. She’s made a promise to herself: don’t let anyone in, and don’t let anyone love her. She’s learned the hard way what happens if she breaks her rules. So she’s focused on being invisible and waiting until she can set out on the road—her dream of freedom, at least for a little while.

Blake Hunter is a basketball star who has it all—everything about him looks perfect to those on the other side of his protective walls. He can’t let anyone see the shattered pieces behind the flawless facade or else all his hopes and dreams will disappear.

One dark night throws Chloe and Blake together, changing everything for Blake. For Chloe, nothing changes: she has the road, and she’s focused on it. But when the so-called perfect boy starts to notice the invisible girl, they discover that sometimes with love, no one knows where the road may lead.

Where the Road Takes Me was a good read, but I was a bit let down by the end. It was alright until that point, but I don't know. Something about the ending just didn't do it for me.

*Note: There will likely be some spoiler ahead!! If you don't want to know how this ends please don't read on!!*

So Chloe has a plan. She is going to stay away from everyone, not get attached to anyone, definitely not fall in love, then once she graduates high school she will leave. She will just roam around wherever the road takes her and never have any real relationships with people. She can't. She knows what it is like to lose someone and she won't do that to anyone.

Blake has his own problems. He is the star basketball player, popular guy, but while his life might look perfect to those on the outside it is anything but. When he comes across Chloe late one night things change. He is intrigued by her. He wants to get to know her. He wonders how he could have ever not noticed her before wandering the halls at school, but he is so sweet. He knows she wants to stay invisible so even though it kills him he pretends to not notice her. He doesn't talk to her at school. He doesn't draw attention to her. He is always trying to do what she wants, what she says will make her happy. Oh he was a sweetheart.

So Chloe keeping herself closed off from others is what she claims to want. She lost her mom and her aunt and now lives with a great couple who fosters her and some other kids. She...she could be frustrating. When it was revealed why she was keeping everyone away, why she didn't want to get close to anyone or think of a future, I must admit I was a little disappointed. Like this is all? You have a 50/50 chance of having something bad so you are just not going to live your life? Okay...I get that she is young and scared, but I guess I just wanted more. And she was alright. Really the author did a pretty good job of not making me want to yell at her every two seconds. But still. I...I know she was trying to not let anyone in, but she is so close with her foster siblings and her foster parents that I don't know how she can't see that leaving them without looking back would hurt them greatly. How that is almost like what she is afraid of. That that would be similar to what she doesn't want to happen for them. It would be like they lost her so...I just didn't understand how she could think they didn't love her. How she thought no one did so she would be okay just disappearing. I didn't really understand how she could keep her head in the sand even when they pointed it out to her. When one of the younger kids got angry that she was leaving him and such - how did she not see that this is hurting him? I don't know. I still liked her though which is really props to the author. With someone else this book would have been very tedious to read instead of an enjoyable read.

So of course Blake and Chloe get closer despite her trying to stay away. And things progress, she acts out when things get too serious, and Blake is just amazing with her. Oh I loved him. But then the ending. Is is horrible to say that I think it would have been a much better book if a) she didn't really have the cancer gene or b) she died at the end? When she did get cancer I was all ready for her to die. It seemed like that would have made for a better story. Like she learned that living is better than hiding away doing nothing. Instead it felt too...contrived. It was just like oh, okay, this is what we are doing now? Great...It just didn't work for me. I know it might sound odd to those who loved this story, but I do think it would have been a better story. Oh well. It was a good read, entertaining enough.