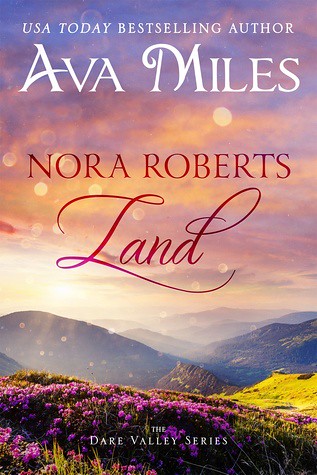 Journalist Meredith Hale’s ex-husband claimed her Nora Roberts addiction gave her unrealistic expectations about marriage, and she believed him. All dreams of happily ever after—or Nora Roberts Land as her mother calls it—went up in smoke. But when her family asks her to temporarily help their Dare Valley, Colorado newspaper, she decides it’s time to change her life and prove her ex wrong. She’s determined to find her own small-town Nora Roberts hero, prove that true love exists, and publish a story about her quest.

War correspondent Tanner McBride has just returned stateside to work for a major newspaper, and the last thing he expects is blackmail. Yet, before he can even unpack, he’s headed to Colorado. His assignment? Make his boss’s ex-wife fall for him and then break her heart. Her article about discovering love à la Nora might air dirty laundry about her marriage to the media mogul, threatening his senate run. The mogul wants Meredith stopped, and he makes sure Tanner has no choice in the matter.

When the two meet, the sparks between them are undeniable. Meredith, who vowed never to date another journalist, begins to succumb. Could Tanner be her Nora Roberts hero? As they work together to uncover the truth behind a suspicious death, the depth of their feelings unfolds and both realize they’ve kept their secrets for far too long. But before the truth can be revealed, their investigation takes a deadly turn, one that might make Meredith’s personal Nora Roberts Land go up in flames.

Nora Roberts Land was just an eh read. It was...well first off maybe I should say I have only ever read one Nora Roberts book. So the plethora of references to her books and characters didn't do anything for me. There were times when it was large chunks of text just naming characters from different books and it just didn't work for me especially because I did not know the characters. Even if I did I don't know that it would have been much better.

Then we have the story. It was just...I am not sure what would make this "Nora Roberts" like instead of just a romance. Plus the people made stupid decisions that didn't make a lot of sense at time, add in a kind of lame "mystery" where you know who did it from the beginning (not in a I think it is this person, but in a this is the person who is doing it, now let's see if we can catch him kind of way) and you have just an eh read.

Meredith has gotten out of a bad marriage. Her husband was cheating on her and blamed her reading these Nora Roberts book for their issues. According to him they put these fancy ideas in her head that don't actually exist in the real world so nothing could live up to her books. Sure okay, but he is a horrible person regardless. She is a bit shaky, a bit unsure of herself, but trying to move on. When she has to go back home to help out her family paper she decides that she will find her own Nora Roberts hero there, fall in love, and prove that it does exist in real life. Plus she is going to write about her adventures. And her evil ex can't have that because...well I don't really know why he would care that much, but he does.

Tanner is a war correspondent who has just come back to the states. His brother had some missteps in his past, and Meredith's ex is using that to blackmail him into making her fall in love with him so he can break her heart. Now here is where I really don't understand the story. Tanner meets Meredith before he knows it is her and wants to get to know her better. But then he finds out she is the one he is supposed to hurt and he is conflicted. He likes her, so he doesn't want to hurt her, but his brother...how can he fail to protect his brother? Now why Tanner didn't just immediately go to Meredith and tell her what her jerk ex was doing I have no idea. She hates her ex so...wouldn't she then just help him out and they could figure out a way to thwart him together? Probably, but he doesn't say anything because...I have no idea why he doesn't. So of course you have them falling in love and Tanner all worrying about telling her so then she finds out in a bad way and there is conflict. Boo.

Through this all there is a subplot of a murder mystery. They know who is supplying kids with tainted drugs that has killed at least one person and then they need to find a way to prove that they did it so they can be put away. It was...I was not a fan of that subplot. Especially since they knew who did it the whole time. Overall it was just an average okay romance with plenty of Nora Roberts references. I didn't really understand why what happened proved that romance like in her books was in real life. It was just...two people fell in love. Isn't that what always happens, in books or in real life? I didn't really see anything special so...I didn't see the whole premise actually being played out. It was just an eh read for me.