Lie To Me (Touched Trilogy #1) by Angela Fristoe 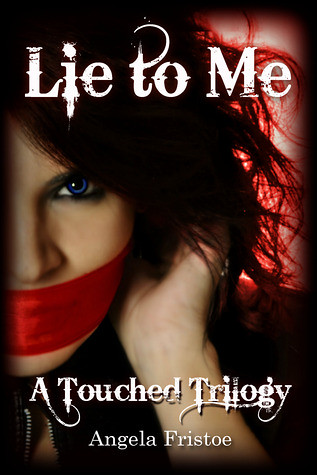 
Phoebe Matlin has always felt broken. While one of her sisters sees the future, and the other can heal people, Phoebe has come to accept that her truth telling gift just doesn't work.

Then her best friend, Tonya, lies to her and Phoebe's gift flares to life. With Tonya pissed at her, being a Truth Teller suddenly doesn't seem like such a great gift. Although, it is nice knowing she was the reason her crush, Nathan, dumped his stalker girlfriend.

But in lies, intention is everything and Tonya's lies are a cry for help. The fear that her friend is covering darker and more serious truths is something Phoebe can't ignore. But knowing when someone is lying is the easy part. Now she has to decide what to do about it. And with Nathan and his doubts about her ability confusing things, finding a way to help Tonya isn't as easy as Phoebe thought it would be.

Lie To Me was an okay read, but I think I am a bit too old for it. I read young adult and normally it is fine, but this one the characters were a little...too young. It is just written for a younger audience.

Phoebe is one of triplets who all have gifts. Only hers has never come in. Her sisters have always had their powers since birth, but Phoebe has often felt like the odd one out. She is supposed to be able to tell if people are telling the truth, but she has never been able to before. So she is just like a normal teenage girl. She has had a crush on Nathan forever, but he picked another girl over her way back when. Only now it looks like he is single again...will that mean that she will finally have her chance with him?

And what is going on with her bff Tonya? When Tonya lies to her one day suddenly she can tell. Suddenly her gift seems to be working...only maybe that is not a good thing. Tonya gets super angry that Phoebe calls her out on her lies, in a nicer way, but still. Now Phoebe has to figure out why Tonya is lying and what to do about it.

Through the story we get to see Nathan and Phoebe grow closer, Phoebe try and figure out how to catch Tonya's boyfriend being untruthful, and how to help her friend. This was an alright read, but like I said I think I was a bit too old for it. There were some good after school special moments about abuse and helping victims of it, but it was just...not for me really. Phoebe is an angry teenager and lashes out a lot and just acts like a teenager.

One thing that did bug me was that the grandmother and everyone kept telling Phoebe she needs to learn to control her gift, but she never does. It was just like every now and again the grandmother would pop up to try and help Phoebe, and Phoebe would push her away and nothing really bad happened as a result of her gift. I kept expecting something to, but it was just...if she needs to learn to control her gift than maybe she should have? Maybe that should have been part of the story? I don't know. It just bugged me.

So overall an alright read but for an actual teenager.