Boy, does Cristin Harber have a surprise for you! She's written a new novella in the Titan series... and it's available now! You can get your hands on SWEET ONE today! See below to get all of the details! 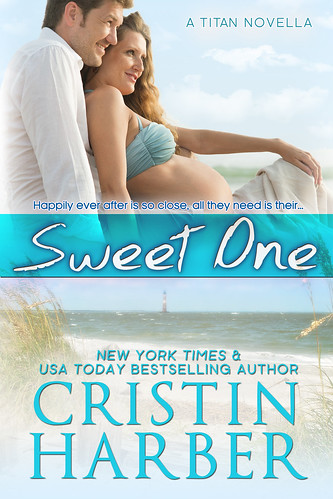 But who knows how bad he’s hurt.

There was an explosion, and he won’t wake up.

It’s the phone call the any Titan wife dreads, and the one that brings Nicola Garrison to her knees in tears. Crying and praying for Cash to wake up, she has one secret to tell him and now it might be too late.

“I’m pregnant. You’re going to be a daddy.” Practicing the words a million times didn’t matter if he wasn’t coming home from his job.

In her rush to save him, she lets down her guard. One slip. One tiny mistake. That is all it takes to let years of protecting her identity fall apart. Her time in witness protection, then at the CIA is called into question by someone who has the power to end her life—and the baby she’s carrying.

As the game of shadows and spooks, mobsters and goons comes back to hunt Nicola, survival takes on new meaning—protecting her baby, her husband, and her life—forcing her to make a choice that would kill her anyway in the end.

She made another quick scan of the perimeter. She squinted. There’s someone over there. Nic didn’t move or act as though she saw that person, who was probably a tourist out for a long walk along the beach—close to the reeds, standing still.

Never one to give up her cover, she stretched, and with faux-carefree laziness, watched another wave, eyeballing the figure in her peripheral vision, before slowly making her way inside.

As soon as the door clicked shut, she moved boots, running from one side of the house to the next. There was nothing like a Jared Westin beach house to keep things armed and dangerous. She hit the master bedroom, slamming to a slowdown, tiptoeing around a sleeping Cash, and grabbed the binoculars.

What else did she need? Hell, right now she was on a fact-finding mission. Back around the bed, and she was—

“Had to get something.” And in a freakin’ hurry. “Go back to sleep.”

“Why?” He hadn’t bothered to open his eyes or move.

Cash turned his head and opened his eyes. “Lie to me again, and see what happens.”

“You ran through the house like you were up to something.”

“I’ll explain later.” Telling him now would make his head explode, and that’d be bad for recovery and all. “My bird watching is time sensitive. Grill me later. Please?”

His eyes narrowed. “You have the Spidey senses too.” He pushed out of bed, feeling along the side of the nightstand until he retrieved a Glock 9.

He stood up, pausing for what had to be a second longer than his old norm. “Let’s go.”

“The doctor said no loud noise, no percussive forces. He stipulated no gunfire.”