Odds Against Tomorrow by Nathaniel Rich 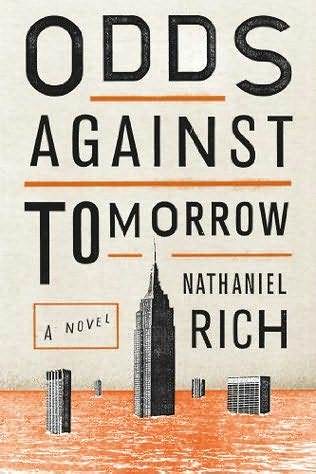 New York City, the near future: Mitchell Zukor, a gifted young mathematician, is hired by a mysterious new financial consulting firm, FutureWorld. The business operates out of an empty office in the Empire State Building; Mitchell is employee number two. He is asked to calculate worst-case scenarios in the most intricate detail, and his schemes are sold to corporations to indemnify them against any future disasters. This is the cutting edge of corporate irresponsibility, and business is booming.

As Mitchell immerses himself in the mathematics of catastrophe—ecological collapse, war games, natural disasters—he becomes obsessed by a culture’s fears. Yet he also loses touch with his last connection to reality: Elsa Bruner, a friend with her own apocalyptic secret, who has started a commune in Maine. Then, just as Mitchell’s predictions reach a nightmarish crescendo, an actual worst-case scenario overtakes Manhattan. Mitchell realizes he is uniquely prepared to profit. But at what cost?

At once an all-too-plausible literary thriller, an unexpected love story, and a philosophically searching inquiry into the nature of fear, Nathaniel Rich’s Odds Against Tomorrow poses the ultimate questions of imagination and civilization. The future is not quite what it used to be.

Odds Against Tomorrow was a fun read. Everything was a bit on the ridiculous side of things which made it really enjoyable. I loved Mitchell and his obsession with worst case scenarios and everything that happens.

Mitchell is afraid of dying. He is always seeing what the risks are of doing anything and trying to figure out if it is worth it. For example elevators - what are his chances of dying in an elevator accident? And if he works on the 70-somethingth floor of a building is it reasonable to take the stairs instead? It was quite amusing to me. I loved all the random facts and just how hung up on it he is. The whole basis of the story is he eventually becomes a "fear professional". The company he ends up working for is exploiting a loophole in a law where they would get super rich by getting companies to pay them money to prove they were trying to do everything to keep their employees safe in a worst case scenario. His company doesn't have to do much except convince their clients that they need their services. Ever since the huge earthquake in Seattle (which I loved read by the way) where companies went bankrupt after being sewed by employees families, people are more open to this kind of thing. And Mitchell sells it well. He is so obsessed with fear and calculating what could happen he is very convincing. He makes everyone think that the worst could happen.

Throughout it all Mitchell becomes obsessed with Elsa, "a walking worst-case scenario." She has a heart condition that could literally make her drop dead at any moment, and yet she seems to be living. How can she do that? How can she not be paralyzed by her fear? He trades letters with her, writing about his life as a fear professional and she her life living on a commune in new England, and each one makes Mitchell feel like he know her. Makes him more intrigued by what she is doing. You know she is this person, this thing which he kind of desires to be. He wants to learn her secrets so he too can live without fear.

When an actual worst case scenario happens it was interesting watching how Mitchell dealt with it all. He never really planned more than the worst happening. He didn't plan on what to do after and it was fun. You can see a lot of it coming a mile away, but it was still that little bit on the ridiculous side that made me love it. I really enjoyed this read. Mitchell was fun and crazy, but almost reminds me of some people I know in real life. It was just a fun read.