Under Locke by Mariana Zapata 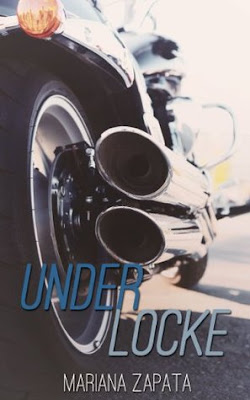 He was my boss, my brother’s friend, a Widower, an ex-felon, and a man I’d seen casually with a handful of women. But he was everything that gripped me, both the good and the bad. Worst case scenario if things turned awkward between us, I could go somewhere else. I’d gotten over epic heartbreak before, one more wouldn’t kill me.

After moving to Austin following six months of unemployment back home, Iris Taylor knows she should be glad to have landed a job so quickly... even if the business is owned by a member of the same motorcycle club her estranged father used to belong to. Except Dex Locke might just be the biggest jerk she’s ever met. He’s rude, impatient and doesn’t know how to tell time.

And the last thing they ever expected was each other.

But it was either the strip club or the tattoo shop.

… she should have chosen the strip club.

I really wanted to love Under Locke as much as I loved the author's other books, but I didn't. It was just not as good, unfortunately.

Iris has not had it easy, but she has a new beginning. A new start in Austin with the help of her half-brother. She has a place to live and a job and things could be worse. Only her job is at the tattoo parlor with Dex who is a bit of a jerk. Now this story was okay, but Iris bugged the heck out of me. I really didn't like her. She would harp on about stupid things and never let them go no matter what happened. Like on day 2 she overheard Dex say that she was stupid (she is) and that is like the worst thing that has ever happened to her. Whenever she thought about it she would almost cry...which I didn't understand. She has had a rough go of it recently so...why is this that big of a deal? And Dex for his part apologizes again and again for it and yet she still can't let it go. It was frustrating.

She also made seriously stupid decisions then get all whiny when Dex would treat her like a naive kid that she was. It was like she would act like she was two and cry about how he treated her like she was two. I found it very annoying. I have no idea why Dex would even like her.

Now Dex I liked. Sure he has a temper, but he was also sweet and hot and kind and I liked him. It was just Iris acting like she was two all the time that ruined the story for me. Which is too bad, because with Dex as our male lead it could have been awesome. Oh well. Not my favorite from this author, but will still read more of her work.