Only You (Bachelor Brotherhood #1) by Denise Grover Swank 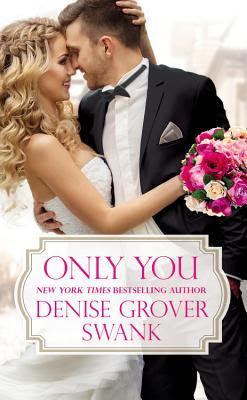 Romance isn't an option for Holly Greenwood. With her wedding planner career on the line she needs to stay focused, and that means pleasing her demanding boss, not getting distracted by her mind-alteringly hot neighbor . . .

Ex-Marine Kevin Vandemeer craves normalcy. Instead, he has a broken-down old house in need of a match and some gasoline, a meddling family, and the uncanny ability to attract the world's craziest women. At least that last one he can fix: he and his buddies have made a pact to swear off women, and this includes his sweetly sexy new neighbor.

After one hot night that looks a whole lot like a disaster in the light of day, Kevin and Holly are about to learn that true love doesn't play by the rules . . .

Only You was another great read from this author. It is a spin-off from the Wedding Pact series, but you don't have to have read them to read this one.

Holly loves to plan weddings. She loves her job, but her boss is...let's say a bit strict. A bit crazy. Holly works her butt off for her boss Nicole, does so much, but Nicole always gets all the credit. It is worth it to her though, as someday she wants to have her own shop. She wants to be able to plan her own weddings.

Kevin is just back from serving overseas and is trying to get back into civilian life. His sister, Meghan, bought him a house that she says is a fixer-upper, but when he sees it he can't believe she actually did that to him. That this is the house that she blew all his money on. It is a disaster and is going to take a long time to get it into shape.

Neither of them were looking to fall in love. Holly doesn't want nor has time for a relationship. And neither does Kevin. In fact, Kevin made a pact to swear off women. Only now that they are neighbors one thing leads to another. After a super hot night they both realize they might not have been looking for it, but they might have found it. Kevin definitely wants more and oh these two were so cute together. Now everything is not sunshine and roses just yet. There are some unforeseen circumstances that arise, but it was so much fun to read. I loved both of them.