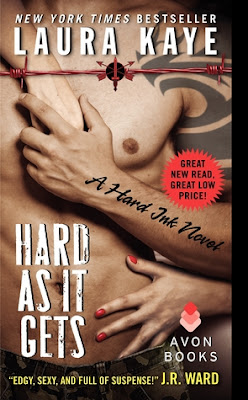 Trouble just walked into Nicholas Rixey's tattoo parlor. Becca Merritt is warm, sexy, wholesome--pure temptation to a very jaded Nick. He's left his military life behind to become co-owner of Hard Ink Tattoo, but Becca is his ex-commander's daughter. Loyalty won't let him turn her away. Lust has plenty to do with it too.

With her brother presumed kidnapped, Becca needs Nick. She just wasn't expecting to want him so much. As their investigation turns into all-out war with an organized crime ring, only Nick can protect her. And only Becca can heal the scars no one else sees.

Desire is the easy part. Love is as hard as it gets. Good thing Nick is always up for a challenge...

Hard as it Gets was an odd read for me. It is one where I am not quite sure why I loved it as much as I did (and why I am writing this review quickly so I can get on to book #2!). If I think about it the story has a lot of things I normally don't like, but somehow I didn't care or they worked in this context. So it was a strange read for me.

Nick is a former Army Special Forces guy. He loved what he did, he was good at it, and the men he served with were like brothers to him. Until everything went wrong and he was not so honorably discharged in a big cover-up. Since then he has not been able to shake that it is all his fault he and the remaining men on his team's reputations were tarnished. That he failed them. Plus he doesn't know what to do with his life now that the only thing he did know has been taken away. So he is hanging out with his brother, doing some tattooing on the side and just floating.

Becca needs help. Her recluse of a brother has disappeared and she can't get the police to take her seriously. The last time she talked to him they argued and she can't stand the way they left things. What if something happened to him and she will never get to see him again and tell him how much she loves him? He is the only family she has left and she won't stop until she finds him.

Luckily for Becca her brother left her one last message before he disappeared - find Rixey and he can help. Now things don't start off very well between them because of some things between Nick and her father, but luckily Nick is a great guy and can't just blow her off completely. Especially since she pretty quickly gets into trouble and could have easily been kidnapped or killed had he left her high and dry. Of course this means they have to stay somewhere safe and that leads to them falling for each other. Really the events in this book only take place over a couple of days and even though I didn't really feel like they were in love I was all too happy to go along with it. I couldn't stop reading and wanting them to work things out. Nick doesn't think he is a good person and so he runs a bit hot and cold, but I really enjoyed watching him figure everything out. Watching him come out of his shell and relax a bit thanks to Becca.

I also loved Becca. She is so strong and resilient. She will do whatever it takes to get her brother back. No matter how scared she is or tired or whatever she steps up every time. She fights back when needed and doesn't let anyone push her around. She was fun to read.

Oh, one thing I really loved about this story was that there was something that you knew would cause a bit of drama when it came out, something Nick wasn't able to talk about, and I adored how the author handled it. I love when people can be adults and think before lashing out and trashing everything. It was great.

Now going in I thought this was a series of standalone stories and I got to where I had about a half hour left in the book and thought how in the world is the author going to tie everything up in that amount of time? Luckily she didn't as I think that would have dragged down the ending for me. It is a series about different couples in each book, and their storyline gets tied up at the end, but the overarching storyline continues between them. I was very glad to see that as the overarching storyline is a bit complicated and I can't wait to read on and see what happens next.