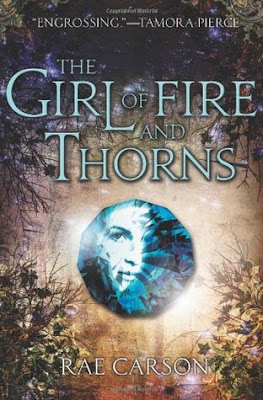 Once a century, one person is chosen for greatness.
Elisa is the chosen one.

But she is also the younger of two princesses, the one who has never done anything remarkable. She can't see how she ever will.

Now, on her sixteenth birthday, she has become the secret wife of a handsome and worldly king—a king whose country is in turmoil. A king who needs the chosen one, not a failure of a princess.

And he's not the only one who seeks her. Savage enemies seething with dark magic are hunting her. A daring, determined revolutionary thinks she could be his people's savior. And he looks at her in a way that no man has ever looked at her before. Soon it is not just her life, but her very heart that is at stake.

Elisa could be everything to those who need her most. If the prophecy is fulfilled. If she finds the power deep within herself. If she doesn’t die young.

Most of the chosen do.

Wow what a wonderful read. When I started I wasn't sure if I would really enjoy it that much since Elisa has the godstone and it is God's will and all of that, but I was pleasantly surprised. A lot of times the religious aspect of books can get in the way of my enjoyment of them, but I loved how the author used it in this context. It was more like how I see religion and a lot of religious people - just look at history.

Elisa is a bearer. She has a godstone, but no one really knows about it. I loved her. She was so strong and an actual person. She didn't always know what to do, but she tried to figure it out. She struggled along the way, but in a way that made her real. Like we all do. She had some hard times, but she didn't complain about petty things. She went with it and tried to understand the people and why they were doing what they were doing. It was a lot of fun.

I especially loved how Elisa thought about God and her godstone. How she wasn't sure what she is supposed to do, she always questions what God's will really is. She was the only one as everyone else used God's will as a way to justify whatever they were doing. There was a time when she gets super frustrated like how does everyone else know what God's will is and I, the one with the godstone, the one who is supposed to carry out his will, don't? How is that possible? It was amazing. Because throughout history you can see a lot of that - even today. People using God/religion as a way to start wars and do what they want. I loved the discussion surrounding it. Though I will note that the actual placement of the godstone - where it was - was...icky. Like talking about it I can't help but imagine it and bleck! No. I don't know why it bothers me so much, but it did.

The other thing I liked about this story was that the romance was secondary. Elisa has a role to play, and she does get to know some guys and fall for them, but it wasn't the main purpose of the book. Some of the men surrounding Elisa were really weak and that contrasted nicely with her doing what needed to be done and figuring things out. Some were so awesome I loved them (like Humberto!), but the main focus is Elisa and what is happening in the world around her. Overall this was a great read and I can't wait to read more!