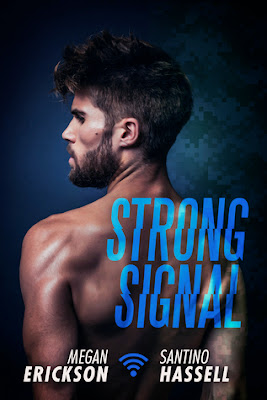 I was counting down the months until the end of my deployment. My days were spent working on military vehicles, and I spent my nights playing video games that would distract me until I could leave Staff Sergeant Garrett Reid behind. That was when I met him: Kai Bannon, a fellow gamer with a famous stream channel. I never expected to become fixated on someone who'd initially been a rival. And I'd never expected someone who oozed charm to notice me - a guy known for his brutal honesty and scowl. I hadn't planned for our online friendship to turn into something that kept me up at night - hours of chatting evolving into filthy webcam sessions. But it did. And now I can't stop thinking about him. In my mind, our real life meeting is perfect. We kiss, we fall into bed, and it's love at first sight. Except, like most things in my life, it doesn't go as planned.

Strong Signal was...an odd read. I was excited to read a M/M romance, especially one that started with emailing back and forth, but...I don't know. Something about it felt off to me. I did enjoy it, but not as much as I was hoping.

Garrett is in the military and counting down the days until he can go home. For good. He spends his evenings playing computer games, but he is not too happy when one day someone with a much higher level takes him out. He thinks it is kind of a jerk move so he looks into who this player is. That is how he finds Kai.

Kai is a fellow gamer with his own gaming channel. He plays a lot and has a big fan base and is gay. When Garrett writes to him neither of them expects it to start something between them. They don't expect to quickly start to fall for one another. Only Kai has a secret - he has really bad social anxiety. He pretty much doesn't leave his house ever. If he needs something he has it delivered. He can't deal with being out and in the world like most people can. That is why his gaming channel is so perfect. He can make money to live and never leave his house.

Only what happens when Garrett shows up on his doorstep? When he is back for good? Can the two of them work this out in a way that works for both of them?  This story was alright, but it was missing something. I didn't really feel like they were in love or something. I don't know. I wanted to love this story, I did enjoy it, but I don't know why I didn't like it more. The characters were a bit flat and it was a bit disappointing. Oh well.