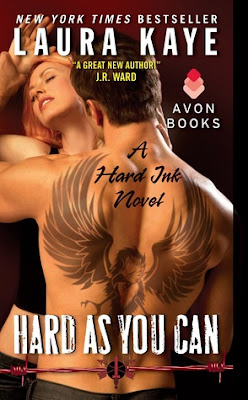 Five dishonored soldiers.
Former Special Forces.
One last mission.
These are the men of Hard Ink.

Ever since hard-bodied, drop-dead-charming Shane McCallan strolled into the dance club where Crystal Dean works, he’s shown a knack for getting beneath her defenses. For her little sister’s sake, Crystal can’t get too close. Until her job and Shane’s mission intersect, and he reveals talents that go deeper than she could have guessed.

Shane would never turn his back on a friend in need, especially a former Special Forces teammate running a dangerous, off-the-books operation. Nor can he walk away from Crystal. The gorgeous waitress is hiding secrets she doesn't want him to uncover. Too bad. He’s exactly the man she needs to protect her sister, her life, and her heart. All he has to do is convince her that when something feels this good, you hold on as hard as you can—and never let go.

After finishing book one, Hard as it Gets, I wasted no timing picking up Hard as You Can so I could see what happened next. I love that this story picks up right where the last one left off. Or right before the last one so we get the ending from Crystal's point of view (you meet her briefly at the end of book one). I don't know why I love these stories so much, but I do. I can't put them down once I start.

Shane is one of the ex-Army Special Forces team that assembled in the last book to try and get Becca's brother back from the bad guys. The guys who may somehow be connected to their reputations being tarnished. He was best friends with Nick, but since they got back stateside he hadn't heard from him until recently. Until he needed help with a mission. And Shane is not completely ready to forgive Nick for that yet. I mean they were best friends and then nothing for about a year? Though since his run-in with Crystal the night before he can't stop thinking about her. She was obviously terrified of what would happen if anyone found out she helped them, but why is she so afraid. He let one female in his life down already, he doesn't even know what happened to that one, and he is not about to let another one down like that again. He has a hunch that Crystal is trustworthy and may be able to help them so he will do what he can to help her as well.

Crystal got mixed up in a life she never wanted. She would do anything for her sister, who has epilepsy and needs expensive medication. Medication that she wouldn't be able to afford on her own. So she puts up with more than she should, but she only has a few months left before she can escape. If she can last that long. She puts on that happy face like everything is fine when inside she knows it is not. But she is in this situation and she can make it out of it. By herself because if there is one thing she has learned it is that you can't trust anyone else.

Crystal is very skittish and afraid to talk to Shane. If anyone found out that would be the end of her. It doesn't matter that she is attracted to him and he seems like a great guy. She has to try and stay away before anything happens to her or her sister. Only Shane doesn't make it easy.

Now I did have a bit of a hard time seeing Crystal just be okay with Shane so easily and everything. It seems like being abused for so long she might have more issues, but as with the first book I was okay just going along with the story that these two fell in love in like a day. For everything that happens in this story it is again not very much time that has passed. I mean it has only been like a week since Becca first showed up and brought these guys back together again. I liked Crystal and Shane, maybe not as much as Becca and Nick but I really liked those two. I still can't wait to read on and see what happens next!